Home Dining Chefs and Restaurateurs One Night in Koreatown 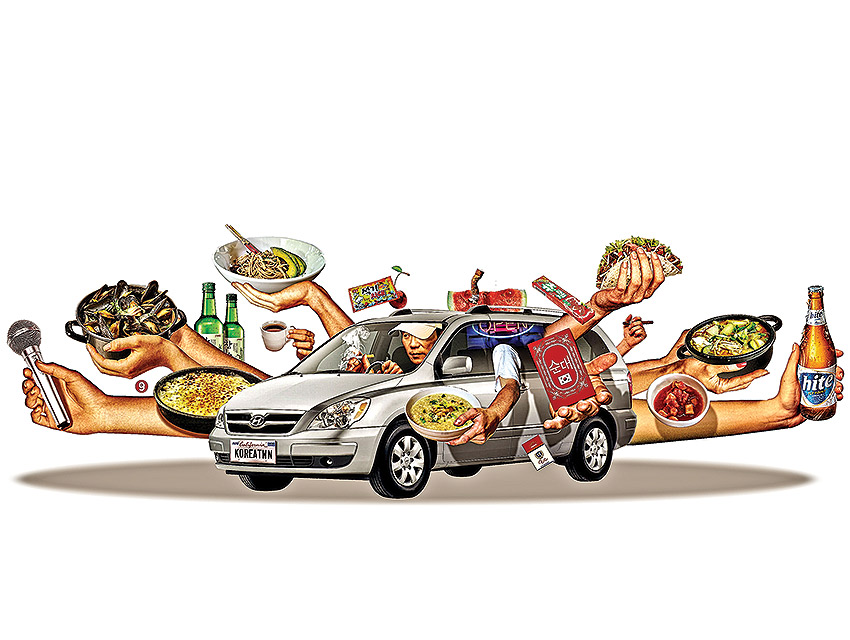 It’s 8 a.m. when I open my eyes and realize: This isn’t my bed. I am sprawled on a bamboo mat at Wi Spa, a multilevel temple of pampering and relaxation on the eastern edge of Koreatown. Feeling like Ed Helms in The Hangover, I peel myself off the floor and walk out the door to sunshine and commotion, in search of the closest bowl of restorative congee and cup of coffee (Roy Choi’s green onion-topped porridge at the Line Hotel’s Pot Café does the trick). I’m not missing any teeth, but still, it’s clear: An all-nighter in Koreatown isn’t for amateurs.

In all fairness to one of L.A.’s fastest-growing areas, I didn’t exactly “go easy” last night. Koreatown is home to more 24-hour restaurants and late-night clubs than Hollywood Boulevard, the Sunset Strip, and downtown combined, and I wanted to see how much I could cram into one night. So I asked a few experts to help me: Jimmy Han, the 33-year-old owner of Beer Belly, a craft beer bar on Western Avenue, who began clubbing in Koreatown when he was 15; Violet Kim, 31, a student and cast member of the short-lived Web series K-Town; and Jennifer Lee, a DJ in her late twenties who goes by the name “TokiMONSTA.”

After a few IPAs at Beer Belly at 10 p.m., we call a Korean “gypsy” cab service, which shuttles revelers anywhere in Koreatown in a weathered minivan for $4 flat. At our first stop, Get Bbul, waitresses dump shellfish onto glowing-hot charcoal grills. Our table is littered with the tiny dishes known as banchan, bottles of Hite, and chilled soju. A hearty “gunbae!” with an accompanying shot happens every other minute. We’ve soon ordered enough alcohol to warrant a complimentary plate of wriggling eel, which our waitress tosses on the fire.

Instead of hitting a Korean pub like Toe Bang or Dan Sung Sa—dimly lit dives where plates of gooey cheese corn are consumed en masse—we roll into one of Lee’s favorite karaoke spots, La Defence, around 1:30 a.m. With its faux-street-scene decor, the place mimics a ritzy Paris boulevard. We polish off some scotch, vodka, beer, soju, two bowls of squid jerky, a basket of fries, a fruit plate, a pack of Camels, and one off-key rendition of Rihanna’s “Stay.” At about 2 a.m. our waiter says it’s time to leave, but we manage to linger for another hour. In most parts of L.A. this would be the evening’s bacchanalian finale. But in Koreatown, calling it quits at 3:15 a.m. is only for quitters.

Another minivan whisks us to an El Flamin’ Taco truck on Vermont Avenue for a tortilla-wrapped nightcap, but the order window shuts just shy of 4 a.m. We vote for Wi Spa instead. Kim and Lee head for the steam room. I slurp a bowl of chilled noodles from the spa’s restaurant, change into the cotton white shorts and shirt provided, then alternate between a salt-lined sauna and an ice-walled refrigerator room, both surprisingly crowded. In need of a nap—stat—I lie down in the communal “quiet room” for a few minutes of rest. Three hours later my eyes open and the throbbing starts. I can tell by the grin of the lobby attendant that I’m not the first person to pass out at Wi Spa, and I won’t be the last. You’ve won this round, Korea-town, but don’t think this is good-bye—it’s just goodnight.

The evening’s kimchi-fueled itinerary, as I sorta remember it

11:30 p.m.: Get Bbul
Hazy Memory: Grilled clams and spicy shrimp. Lee says the knife-cut noodles are like something some-one’s grandmother would make.

1:30 a.m.: La Defence
Hazy Memory: Disco lights and a songbook of K-pop and Top 40 hits. Kim shows me the trick of using a soju bottle cap to juice a whole lemon.