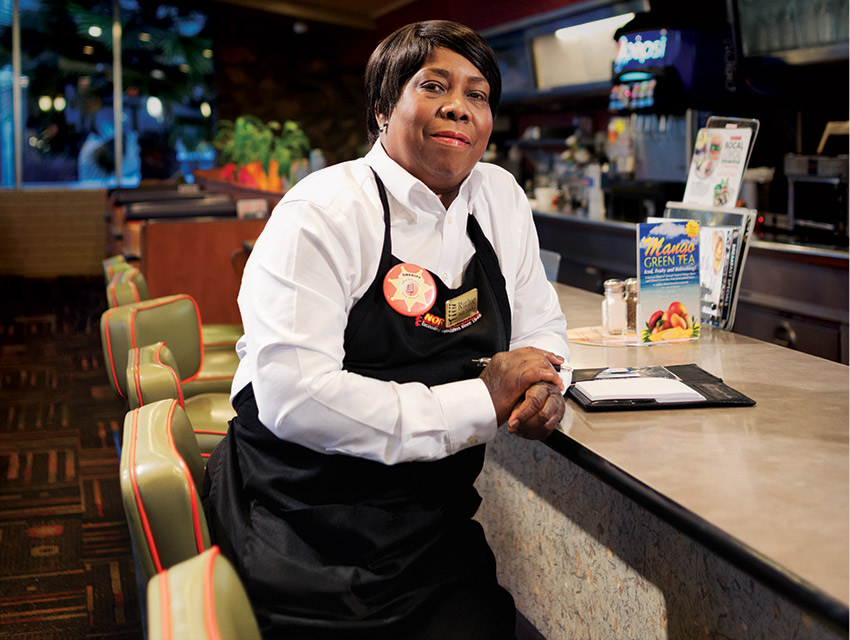 Ruthie Jackson has been a server at Norms on La Cienega Boulevard for 39 years—most of which have been spent catering to an oddball mix of customers between 11 p.m. and 7 a.m. These days she punches in just before sunup, but even in the dark, Ruthie has seen it all.

Working the graveyard shift, you get a lot of drunks, OK? And you get guys who try to flirt with you. And then you get some who want to fight and some who want to walk out on their check. I had customers who met here and got married. They’d cuddle up in a corner, and I thought they were drunk. But I guess they weren’t because later on they’d come in and they’re married!

Guess who came in early in the morning? Denzel Washington! He was in seat number 13. One of the ladies said, “Ruthie! Do you know who you waited on?” I said, “No! No! You lie!”

You know why that pie case is empty? Because they used to have a club over here called the Odyssey, and kids would come in and have pie fights. Baby, they were throwing pies everywhere! Some of them come in now and say, “Ruthie! Do you remember the pie fights? I’m one of those kids.” And I say, “You know, if I had a belt, I would spank you right now!”

When I was a cashier in the ’80s, we got robbed. I was just doing my thing, and a guy came in and grabbed the register. He was running out the door just as the bread man was delivering the bread. I had the lock in my hand that I had just changed, and I threw it and hit the robber in the back, and he dropped the register. The bread man was picking up the money and said, “You’re really brave. You’re protecting Norms.”

The Classic Norms on Pico Is Closing on Christmas Eve