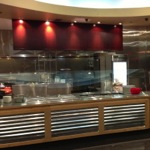 There’s definitely a space for a Zankou-Chipotle mash-up in our “fast casual” dining dreams, and it looks as though we may need to be pinched. The family behind beloved rotisserie mecca Zankou Chicken is opening a new concept called Ara’s Tacos Mexican Grill in Glendale.

No exact opening date, but they are hiring now, so it can’t be too far off. (Open interviews today from 11 a.m. to 2 p.m. for “experienced preps, cashiers, and burrito assemblers”.)

The sign hanging out front promises the “Best Tacos in Town,” which is a pretty bold—if not unfounded—statement to make coming out of the gates. (I’m sure our resident taco whisperer Bill Esparza might have a thing or two to say about that.) And while it’s unclear if there will be any “fusion” runover between the two restaurants’ menus, if Ara’s can make me a stellar taco de papa topped with the famous Zankou garlic sauce, I’m willing to bet it would be ranked pretty highly in my book. [via Eater LA]