Home Uncategorized Your Hot Pot Just Got Smarter: Brains on the Menu at Fat... 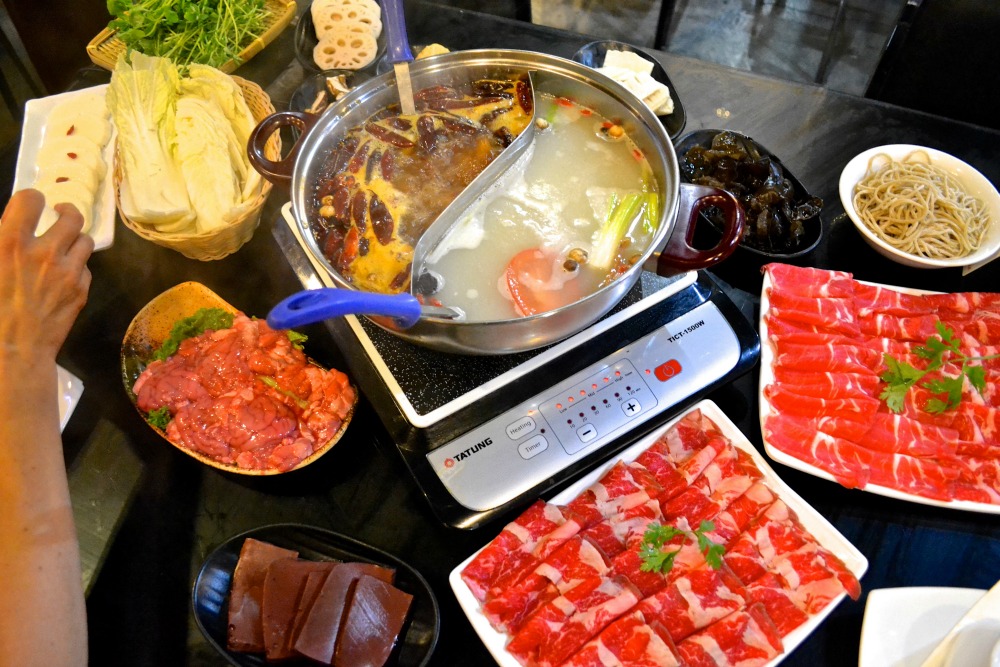 Shanghai, China was the first place I ever encountered pig brain at a Sichuan hot pot restaurant. The year was 2002. The establishment, Huang Cheng Lao Ma, was a multi-storied, hot pot restaurant embellished with intricate and exquisite Chinese art. Each group of guests had their own private dining room with four servers waiting on them.  The brains arrived pink, jiggling, and rested on a bed of lettuce, much like the pig brains I recently experienced at Fat Bull Café in San Gabriel. Believe it or not, these recent brains were the first I’ve spotted at a hot pot restaurant in the U.S. With a wide array of other innards on the menu, it seems that Fat Bull Café has ratcheted up hot pot in the SGV to an offal new level.

Hot pot eating (which is essentially the Chinese version of fondue) has caught fire in the past few years around town. Not only has the Sichuan-style hot pot—the version when raw ingredients are dipped into a spicy peppercorn saturated broth—flourished and spread, but other forms have gained steam too, like Taiwanese hot pot, Vietnamese hot pot, and, of course, Japanese shabu shabu.

Fat Bull Café is about six months into its opening. An all-you-can-eat option is available but this limits you to only three items at a time on the table. The á la carte route is preferred when you’re looking for more exotic fare, like slabs of pig blood, beef tripe, goose intestines, and, my go to, pig brains! At Fat Bull, one order of pig brains gets you a platter of roughly eight lobes. That’s a lot of brain food.

There is a definite technique to cooking brain. The delicate folds of neural tissue must be gently placed onto the slotted ladle. Once secure, the brain is lowered slowly into the roiling soup until it is slightly covered with liquid. Cooking must be timed long enough for the pink of the brain to turn white, otherwise the brain will break up and you’ll be fishing out stray bits from your hot pot.

If you’ve never ingested brain, you may imagine that it’s similar to tofu. You’d be correct, mostly. The texture is of soft tofu embraced by an unctuous film of animal fat. Neutral is an accurate way to describe the taste of pig brain, although there is a modicum of fattiness.

At Fat Bull, you can create dipping sauces to your heart’s content at the self-serve, sauce bar. I enjoy a salty and very savory sha cha (a Chinese barbecue sauce) combined with a dollop of sesame sauce and freshly minced garlic. The subtleties of porcine gray matter shine brightest when they are dipped into a sauce.

And that’s a no-brainer.