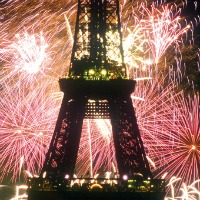 Share
Email
Facebook
Twitter
Pinterest
ReddIt
Francophiles unite! This Thursday is Bastille Day, the French national holiday commemorating the start of the 1789 revolution. If you’re looking for something to curb your appetite after sitting through a 3-hour performance of Les Misérables at the Ahmanson Theater then look no further than these L.A. restaurants, which will be offering special deals on classic French dishes.
Fig & Olive
From 4:30-7:30 p.m., the restaurant will offer a special Provençal wine tasting, live music, and a commemorative prix-fixe menu crafted by Chef Pascal Lorange in true Rivera-style grandeur.
8490 Melrose Place
Los Angeles, CA
Breadbar
If a flaky croissant or baguette is what you crave, Century City’s Breadbar will be offering a selection of fresh baked pastries for breakfast, as well as a special menu with items like French onion soup, Niçoise salad, and a croque monsieur later in the day.
10250 Santa Monica Boulevard
Los Angeles, CA
(310) 277-3770
Church & State
Chef Jeremy Berlin will be offering assorted paté and brie sandwiches, Christophe Happillon will be shucking at the raw bar, and sommelier, and Sarah Clarke will be pouring a selection of French wines by the glass. On Church & State’s front patio guests are invited to play Pétanque, the French version of bocce ball.
1850 Industrial Street
Los Angeles, CA
(213) 405-1434
Cliff’s Edge
The Silver Lake bistro will offer a prix-fixe menu of classic French specialties like escargots, boeuf bourguignon, and tarte tatin, available for $45 per person including wine. Diners can also have their photo taken with their head in a guillotine á la Jean Valjean.
3626 West Sunset Boulevard
Los Angeles, CA
Bonus: Maison Giraud
The Pacific Palisades Patch has suggested that Alain Giraud’s Maison Giraud may open on July 14th. The former Citrus chef’s new restaurant is one the city’s most anticipated French patisseries, and a special Bastille Day opening would be downright…revolutionary.