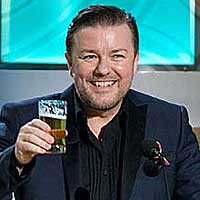 The Golden Globes air this Sunday on NBC. To aid in your revelry, we at Los Angeles magazine have come up with a Globes-themed drinking game. You know the rules.

TAKE A DRINK EVERY TIME…

-They cut to somebody in the audience NOT laughing

-Someone thanks Mad Men for being out of the running

-FINISH your drink every time they cut to Alec Baldwin

-Kristin Wiig mugs to the camera, doing—you know—that face she does

-A winner nods to the other amazing actors in their category

-Ricky Gervais drinks from the podium (do a round with Gervais!)

-They cut to a Moët champagne bottle or other sponsor beverage

-You spot a disease ribbon

-You hear a British accent

-Someone does a silent movie joke

-A presenter steps on another presenter’s line

-Someone says the word “Glee”

-An actor says the word “journey”

-An actor thanks their agent, manager, and publicist – IN THAT ORDER.

-Ricky Gervais cracks himself up

With that, have a fun Monday morning folks!