Home Uncategorized You Knee’d the Chicken at Hop Woo Barbecue 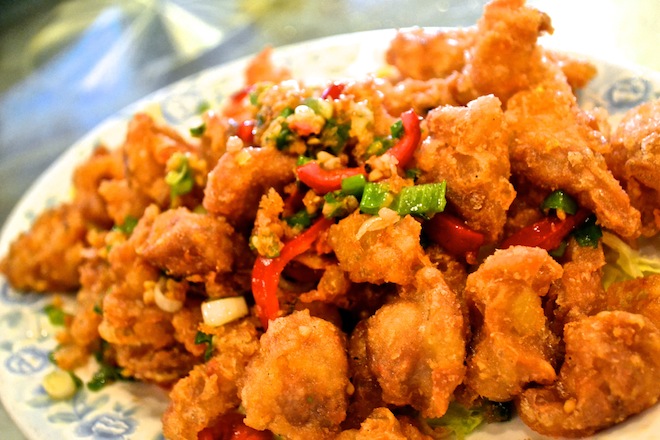 Of all of the chicken parts that people have been known to eat, the knees have never been on the popular list. Even at Japanese yakitori restaurants—where one can find nearly every part of a chicken skewered and grilled, save the cluck—the chicken knee or hiza nankotsu is still a rarity.

Be honest: did you even know that chickens had knees? Perhaps not, and that’s O.K. For the record, the chicken’s knee is the tiny joint connecting the drumstick to the foot. It’s mostly made up of cartilage and has almost no meat. Chinese chicken knees are like popcorn chicken with a punch—due to the cartilage that pops when you bite into a morsel.

Frying these nuggets turns them into a highly addictive snack, and I can’t imagine anything at a Chinese restaurant pairing with beer better. If you want to taste them for yourself, you don’t have to go far: Chinatown’s Hop Woo Barbecue fries up a version that might bring you to your knees.

Roughly a couple dozen knees (much less than a pound) arrive on a plate at Hop Woo. Red fermented bean curd—sometimes known as “Chinese cheese”—is used as a marinade and adds an intense pungency as well as a whole lot of salt. Cornstarch and egg are mixed in to bind the mixture. Then, the knees are twice fried for extra crunch. Finally, the fried knees are tossed around in a wok with pre-fried garlic, chilis, green onion, and house seasoning salt. Crispy and spicy, they have a real kick—and are the best bit of snack-sized fried chicken you’ve never had.