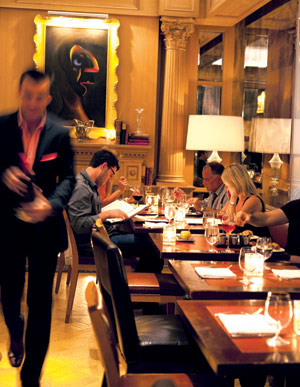 I remember being stuck in traffic on Sunset near Laurel Canyon, looking at XIV before it opened a couple of years ago. Designer Philippe Starck had reimagined the old Coconut Teaszer, positioning a massive ivy-covered roman numeral by the entrance and sheathing the front in a metallic material that looked like it came from NASA. On a giant mural in back, Versailles-worthy aristocrats who had been doodled on frolicked amid an arbor. Whimsy was in the air, and with Michael Mina overseeing the kitchen, talent was abundant. I couldn’t wait to see how it all came together at the mouth of the canyon where Jim Morrison’s ghost roams.

The problem was, things didn’t come together. The demarcations between modern-day nobles and the rest of us were too vividly realized. When I could finally get a reservation, my group and I were led across the dining room, past the long-legged women and Industry types, beyond the elegant paneling and cozy fireplaces to the cramped balcony. We felt like C-listers trying to crash the VIP section. There was a 35-course, $250 tasting menu, but even the regular menu, with more than 50 options that staggered from lobster to mirepoix to eco-minded pine nut terrines, was so dense and hyperbolic it came with instructions: “All selections prepared for the entire table, $8 each, priced per person.”

Only after a tortured exchange with the waitress about whether the turnip tartare with charred broccolini would cost $8 or $8 times four was I reminded of Mina’s talent. The dish had a startling purity, like an oyster produced in the vegetable kingdom. But such epiphanies were drowned out by a restaurant that mixed tastiness with tastelessness and seemed generally confused. I mean, people didn’t know what to call the joint: Was it “fourteen” or “quatorze”? No wonder, two years later, the restaurant has repositioned itself. Gone is the chilling caste system. The host who led me not long ago to a table by a crackling fire in the center of the room would have needed to back away bowing for me to feel any more master of the manor. The terrace, that former holding pen for the unglamorous, is just for weekend drinks now. Today XIV’s menu—printed with the word “fourteen” at the top—consists of a single page that has supplanted the pompous with the playful.

You can order a summer truffle cavatelli with violet artichokes, but you can also have a grilled cheese sandwich, a dish of simple perfection whose only fancy touch is the dab of basil foam that crowns the accompanying cup of tomato soup. Mina goes more vernacular with the chicken nuggets, crisped hunks of grilled meat finely chopped and folded into a silky mousse that is as billowy as a quenelle. The staff gets into the act, too. Sous-chef Ryan Ososky explores his Polish heritage in a thrilling version of pierogi that combines the hominess of potato, the smoki-ness of Gouda, and—a brilliant twist—the crispness of chicharrónes, made from pork rinds that have been rendered in-house. Despite the recent departure of Steven Fretz, the gifted executive chef, this new version of XIV seems much more cohesive. It’s a happy jumble of a menu and something rather unexpected from a person like Michael Mina, who’s had a game plan from the beginning.

Mina began his career at the Hotel Bel-Air. A student at the Culinary Institute of America, he worked as a pastry minion under George Morrone. The two continued on to start the highly touted Aqua in San Francisco in 1991. Since then Mina has become known for a truffle-stoked classicism that in less skilled hands would seem dated. Many chefs might recoil at the idea of serving a single appetizer of foie gras as both a terrine and a sautéed lobe. Such flourishes are Mina’s bread and butter. With Andre Agassi as his business partner, the chef has leveraged his skill into a string of 17 restaurants across six states. The type of establishment may vary from steak house to fish grotto to modern-day bistro, but the settings are invariably the same: business hotels, casinos, ritzy condo towers.

XIV immediately announced itself as a departure for Mina. It would be housed in a squat structure on Sunset, and rather than a corporation that might slavishly provide whatever he required to work his magic, Mina was dealing with Sam Nazarian’s SBE Group. Though not a food person, Nazarian in his transition from nightclub impresario to restaurateur has shown a keen ability to draw out the defining trait of his various partners. At his glossy versions of Katsuya, which began as a tiny sushi bar in Studio City, he highlighted the scene that was latent at the original. With the Bazaar on La Cienega, he homed in on Spanish-born chef José Andrés’s Barnum-esque personality to create a floor show of molecular cooking.

With Mina, things were different. For whatever reason, Nazarian couldn’t do what he normally does so well, imbuing gastronomy with some live-a-little joy. Soon enough they’d rotated through everyone in the city who might be interested in expensive small plate dining. Failure sent the two back to their blueprint, and in cutting away layers of padding they revealed the precision that is essential to Mina’s cooking. It twinkles in the tai snapper, a whole fish fried in the most ethereal tapioca tempura and cooled by a white soy vinaigrette. It is apparent in the delicate tomato and peach salad that you can order with the $40 prix fixe menu. Even the garlic-laced falafel burger—the Egyptian-born chef’s homage to his mother’s cooking—arrives formfitted into a bun like a jewel in a box.

Pinpoint precision shines as well in the crosshatched sear marks on the wonderfully unadorned chunk of grilled halibut. In fact, the grilled dishes—the backbone of XIV’s new format—may be my favorite style of cooking here. Stripped of steak house connotations, they are exquisitely direct. There’s something about the clarity of the blue spot prawns and the fillet of prime Angus that, when paired with sides of jalapeño creamed corn or spinach gratin, is truly grand.

The precision wavers, however, with Mina’s trio of signature dishes. His tuna tartare, mixed at the table, seems overproduced by half and winds up occluded under a slick of sesame oil. The lobster potpie, meanwhile, proves to be little more than a gussied-up version of a basic lobster in cream sauce. If you feel you’ve had it before, you may well have: It is the same preparation Mina serves at Arcadia in the San Jose Marriott, Bourbon Steak at the Four Seasons in Washington, D.C., and Stonehill Tavern at the St. Regis Resort in Dana Point. The only success of the three is the caviar parfait, a tower in which layers of warm potato, cured salmon, chopped eggs, and whipped crème fraîche lead to the briny roe.

The restaurant still carries a tasting menu, a $75 seven-course affair that features American wagyu, a wild salmon paillard, and a truffled pasta dish all preceded by sashimi paired with the sharp Vietna-mese dipping sauce nuoc cham. While there are high points—the paillard hits the right classic notes—it’s really just small portions of the other dishes offered at XIV. To me, a tasting menu should have an improvisational element; it’s a chance for a chef to react to what’s available that day at the market and to run with the creative impulse.

Far more satisfying is when Mina reveals his lighter side. In an interpretation of a shrimp cocktail, charred, herb-flecked shrimp are lined up like guardsmen beside a tumbler of avocado-studded cocktail sauce. The Moroccan-spiced vegetables that accompany the impeccably seared strip of Kobe skirt steak bear the homey sweetness of a grandma’s bread-and-butter pickles rather than the mouth-puckering saltiness of traditional North African curing. Chicken breast laid over a mélange of plump corn kernels and spaetzle initially comes off as a sharply executed bit of country cooking. Just when you’re about to dig in, a waiter appears holding a silver pitcher to finish with a caramelized onion jus fragrant with a sherry reduction. A wink like this, where with one cuff-linked gesture Mina gooses his own reputation, is endearing.

Such food invites you to wander through XIV’s great wine list. Sommelier Christopher Lavín is a whirlwind of activity in the dining room. Particularly rich in burgundies, the selection is glorious, but Lavín is never pushy. He is as eager to suggest a $35 Arneis, a white varietal from Piedmont by up-and-coming winemaker Marco Porello, as he is to recommend anything more expensive.

The all-American desserts of Lincoln Carson mirror the restaurant’s newfound directness, and Lavín takes pleasure in pairing drinks with them. A glass of Moscato d’Asti counters the richness of a cherry sundae; a flute of top-notch California sparkling adds to the festiveness of a strawberry shortcake that’s been Mina-ized with ribbons of butter cream and a dusting of streusel clusters. On Tuesday evenings all wines are 50 percent off, and as my finger moved down the selection of half bottles to find a good deal, Lavín suggested that for the real bargain, perhaps I might consider skipping the village wines: Why not go crazy and order a grand cru, like Échézeaux? At that moment I felt like the big shot I’d never felt like at the old XIV. Let me tell you, chicharrónes and pierogi went damn well with it, too.