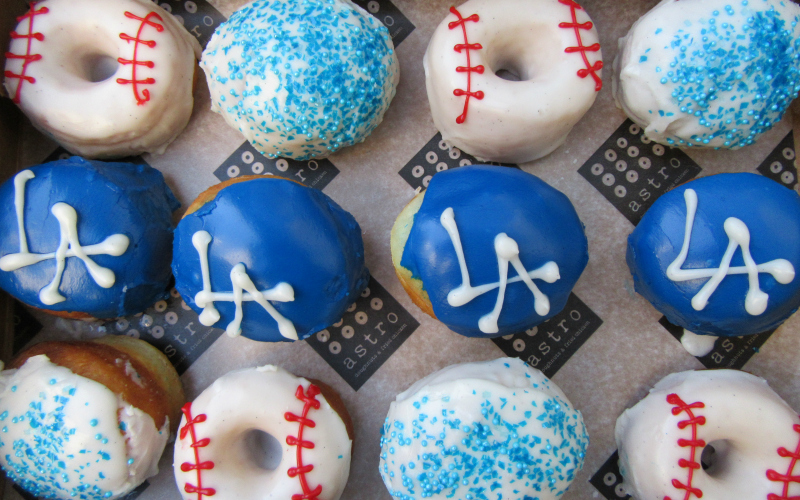 The enthusiasm for the Dodgers being in the World Series is palpable. Local restaurants are getting in on the fun with an array of specials that nod to the team. Eating all of these might result in a blue tongue, but all the better for showing your spirit, right?

L.A.’s most iconic hot dog stand, Pink’s, has decorated itself in Dodger Blue for the World Series. Stop by the stand during the World Series, and you’ll be greeted with bright blue signage and paint—the first time in 78 years that the stand has altered from its classic coloring. Even the staff are dressed in special Dodger-supporting uniforms complete with specially-commissioned hats featuring the Dodger logo… in pink. The World Series fever goes beyond the exterior photo-op. The menu features a limited-edition Blue’s Bacon Chili Cheese Dog, selling for $4.88 (the price being a nod to the last time the team made it to the World Series in 1988) with proceeds donated to The Dodgers Foundation.

Located right on the path to Dodger Stadium, sleek izakaya Tsubaki is getting in on the spirit with its take on ballpark fare. The pre-packed box includes Japanese fried chicken, long beans with sesame dressing, potato salad, pickles and other treats. Or grab a “Japanese Dodger Dog” (house-made chicken sausage, topped with black truffles, yuzu thousand island slaw, and shishito relish) with a side of buttermilk onion rings. All the specials are available for pick-up on your way to or from the game or for delivery around the neighborhood via Caviar. Added perk: For just $6.00, they’ll let you leave your car with their stadium-adjacent valet. This bakery’s name might be Astro, but rather than supporting Houston’s team, it’s all in on Dodger-mania. Order a box of a dozen mini Dodger doughnuts from this DTLA spot for all your game-watching parties or lucky breakfast needs. The minis are classic yeast-raised doughnuts with frosting; thematic boxes can be picked-up in store or ordered online.

4. Dodger Blue Shakes at The Oinkster

Wexler’s is offering another decadent take on the ballpark hot dog, with a subtle throwback to the Dodgers’ old Brooklyn home. Head to their Santa Monica location for the World Series Dodger Dog: a house-made hot dog of Wagyu beef, nestled into a bun with a strip of their smoked pastrami, topped with Russian dressing, raclette fondue cheese, and crispy onion bits.

DTLA bakery Birdies is whipping up a special version of their blueberry doughnut for World Series season, decked out with both a baseball theme and a Dodgers logo. Thought: The Commissioner’s Trophy that gets awarded to the team that wins the World Series bears quite a resemblance to the famous $100 gold-leaf-encrusted doughnut at Birdies.

The meat mavens at Belcampo are serving up some classic ballpark food at their West Third and Grand Central Market locations, just for the World Series Run. The old-school chili dog is true to Belcampo’s sustainable beef practices, and is probably a bit of an upgrade from the chili dogs of yesteryear. Nonetheless, don’t fret if you spent all your money on tickets to be in the stands for a World Series game, this fancy frankfurter will only set you back $5.00.

Big Bar is whipping up a tasty, and very, very blue, cocktail to slurp while you watch the game. The Kershaw Cup features coconut-washed Grey Goose vodka, pineapple juice, lime, turbinado sugar, soda water and, of course, blue curacao. For a garnish, nothing less than an actual photograph of one Clayton Kershaw, clipped to the side of the glass.

Not a special dish, per se, but definitely a special: Umami Burger is dishing out free fries with any burger purchase to all baseball fans who show up to their DTLA, Hollywood, Los Feliz, Pasadena, Santa Monica, Grove, or Thousand Oaks locations on game days sporting some piece of Dodgers gear, in exchange for liking one of the company’s Instagram posts.

RELATED:This Map of Bars Near Dodger Stadium Is Here for You in Your Time of Need