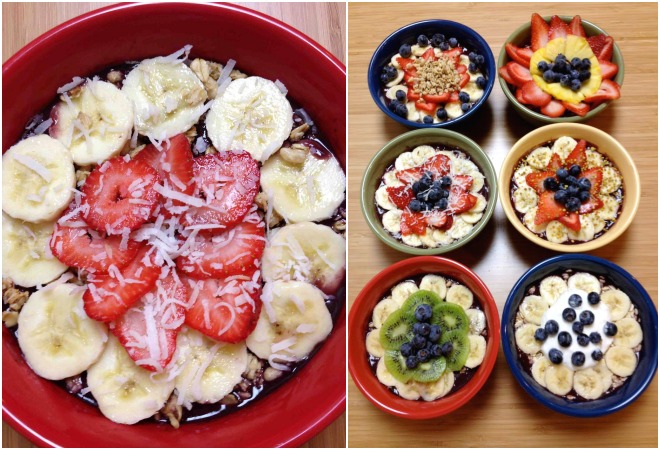 As a food writer, you get asked a lot of questions. Most of them involve recommendations for things like tacos, burgers, and pizza—rightfully so. But surprisingly, another food item gets requested often too: a good and proper açaí bowl. And why not? The trendy açaí bowl makes for a nutritious and delicious breakfast or afternoon snack, especially during the sweltering summer months, and especially when World Cup fever is gripping the country.

For those unfamiliar, açaí bowls are essentially breakfast parfaits, made with a frozen pureé of the purple Amazonian “superberry” açaí and topped with granola, fresh fruit, honey, and such.

In Brazil, where the dish originated and became a cultural phenomenon in 1990s, it’s known as açaí na tigela, or “açaí in the bowl.” It’s become near ubiquitous in Hawaii, too, where it’s sold at beachside stands and juice bars. And of course, the açaí bowl has become very popular (and pricey) in health-conscious California, where you can find it in nutritious (on not so nutritious) juice cafés from La Jolla to Venice to Berkeley.

Ironically though, it wasn’t until I visited Koreatown that I found an açaí bowl purveyor worth championing: Ubatuba Açaí, a small family-run chain (named after a city on Brazil’s southeast coast) that has locations in Tarzana and Northridge, and recently opened another in a strip mall near Western and 6th Avenue.

Owner Daniela Demetrio uses blended açaí pulp (made in-house) rather than frozen juice stuff you find elsewhere, which lends a wonderfully intense berry flavor and a thick consistency. The heaping Almada bowl ($6.50), topped with bananas, strawberries, blueberries and granola is as vivid in color as it is in taste. You can add on toppings such as cocoa nibs, bee pollen, goji berries, hemp seeds, passion fruit, greek yogurt, or Ninho (Brazilian milk powder).

And in true Brazilian fashion, you can pick up a warm empanadas ($3.50) at Ubatuba too, like the one stuffed with juicy ground beef, jalapeños and olives. They are also playing all World Cup matches on a big screen, just so you can get your fútbol fix. Try finding that at your local juice bar.