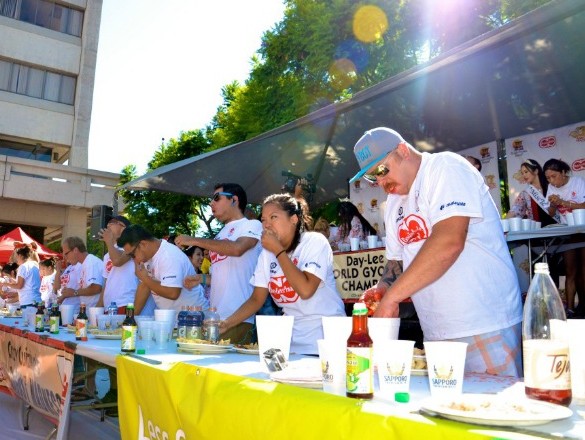 This coming Saturday, August 16th marks the end of Nisei Week, which celebrates all things Japanese in Little Tokyo. On Saturday, though, the focus shifts from culture and art to delicious food! Ramen Yokocho will be set up at the event all day to provide for your ramen-slurping needs.

My laser focus, however, is set on gyoza, those delicious dumplings filled with pork and veggies that are lovingly seared on one side to achieve a perfect golden-brown. But, I’m not just talking about one plate full. I’m talking competitive eater Joey “Jaws” Chestnut serving sizes. I’m talking potentially busting wide open the last gyoza eating record of 268 pieces in 10 minutes, set by Matt “Megatoad” Stonie in 2013.

When I was a growing boy, Mama would boil up plates upon plates of fresh, homemade pork dumplings. I’d eat at least 5 plates of them. This is why I’ve decided to throw my chopsticks in the ring and challenge the top guns of the professional, competitive eater world. The World Gyoza Eating Championship is an official Major League Eating sanctioned event that’s sponsored by Day-Lee Foods, the supplier of all the tasty gyoza.

I’ve been training for weeks by stuffing my gullet with 99 Ranch Market dumplings. I even got myself a nickname: Eddie “Linsatiable” Lin! Now the only thing left to do is get a few pointers on how to win this gyoza contest from last year’s champion, Matt Stonie. These are his words of gluttony!

How is gyoza different from other foods you’ve had in competition? Easier or more difficult to swallow?

“Compared to most contest foods Gyoza is much easier to eat. The wrappers on gyoza are thin, unlike many other dumplings, so they’re nice and soft and go down easy. Also some foods tend to swing heavily in one direction, such as sweet, salty, fatty, or spicy. The Gyoza are pretty balanced.”

Can you give me some brief background on how you started eating competitively?

“It started mostly as a fun dare to eat a 5lb burrito a restaurant served near my house. It wasnt, however, until I signed up for my first contest that I really got drawn in. I’ve always been competitive and love to be the best at what I do. I also love to eat. Jackpot.”

How did you discover your talent for eating on a competitive level?

“I beat a ‘seasoned’ competitor at my first contest. I also broke restaurant challenge records here and there, but that (the contest) is when I really discover I’m not half bad.”

Who is your biggest challenger? Do they have any strengths or weaknesses?

“Joey Chestnut is easily and by far my biggest threat. Him and I have been pushing each other all year, and it’s shown in World Records being broken everywhere. I don’t see any weaknesses in him, he’s a powerhouse of an eating machine. He’s beatable though, and hopefully I can show that Saturday.”

What advice would you give a newbie like me?

“First decide if you want to enjoy or destroy lol. Going in with a strong mindset in the #1 thing a newcomer can do.”

What is your favorite gyoza filling? Do you even like gyoza?

“I love gyoza, otherwise I wouldn’t look forward to this event every year! I’m partial to the Day-Lee Foods Chicken Gyoza, though I have tried the Beef ones once and they were pretty tasty.”

What food is your favorite to eat in competition?

“It’s hard because I look at the contest food like work, but I prefer foods that aren’t spicy or gross. If it’s on a normal menu I’ll eat it.”

How did you train for this competition?

“Training is a year-long thing, but for the past few weeks I’ve been buying Day-Lee Foods Gyoza and getting used to the taste and texture. To become a great swimmer you swim, to become a great eater you eat.”

Do you psych your competitors out? If so, how?

I love to play mind games when I can. If you can get in your competitions head that’s half the battle. But honestly, alot of us get along very well so its good fun smack-talking and the such leading up the a contest.