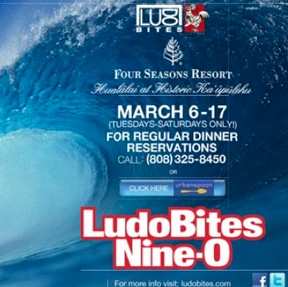 In case you haven’t already heard, the next iteration of Ludovic Lefebvre’s LudoBites is traveling across the Pacific and landing in Hawaii, specifically at the Four Seasons Kona Resort. That may be a bummer for us Angelenos who aren’t keen on paying for roundtrip airfare, but can you really blame a chef for wanting to serve his next meal in Hawaii? Imagine what might pop-up on the menu: kālua pork rillettes? coconut macadamia beuerre blanc? poi créme bruleé?

The good news is that Urbanspoon is giving a chance to residents of Los Angeles, San Francisco, and Seattle the chance to win a package that includes two first class tickets on Hawaii Airlines, a four-night stay at the Four Seasons Kona, and dinner for two at LudoBites. All you have to do is book a reservation at an Urbanspoon-participating restaurant between now and March 9 and you’ll be entered to win.

Considering that LudoBites 8.0, held at Santa Monica’s Lemon Moon, garnered over 10,000 requests in a 24-hour period, we’d imagine that LudoBites 9.0 will have a full guest list as well; even if it’s held in a remote tropical paradise.

Check out www.urbanspoon.com/WinHawaiianFoodFantasy for more details.