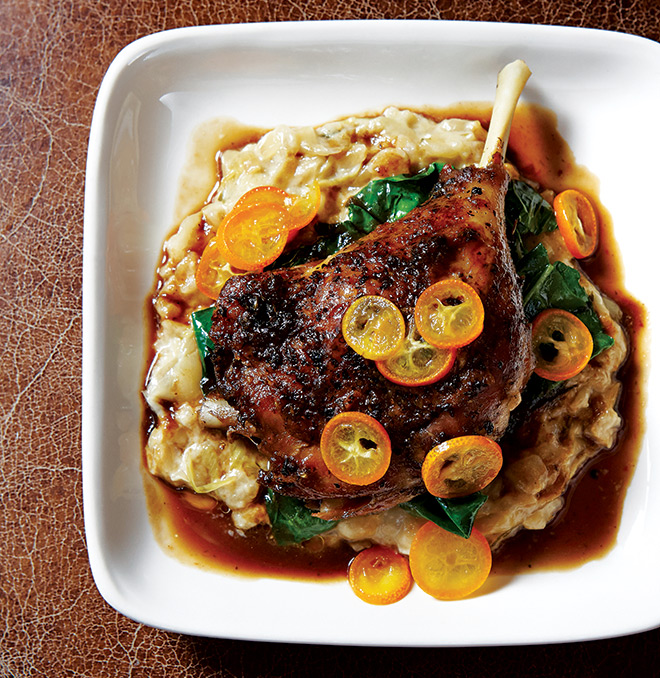 If you aren’t in certain culinary circles, you may not know that today the James Beard Foundation announced its list of semifinalists for the 2016 James Beard Foundation Awards. If you are in certain culinary circles, then you’re probably already gullet-deep in debates among your fellow food fans about the list—who is on it, who isn’t, and if it even matters. These are the semifinals, after all, basically the industry equivalent of a vigorous pat on the back. Only a handful of those listed will actually be named official nominees on March 15, and of them, a rarified few will come home from Chicago in May wearing a medal with a smiling bald guy on it.

But depending on how deeply you’re embedded in that culinary circle, you probably know that the awards that really count are Outstanding Restaurant and Outstanding Chef. The big boys, the ones that don’t use geography as an excuse to grade on a curve. (“It’s an amazing restaurant for Iowa…”). In the latter we see a name we’ve seen here countless times before, Suzanne Goin, and her restaurant A.O.C. is also up for Outstanding Restaurant alongside another semifinalist regular, Michael Cimarusti’s Providence.

Let’s face it; while both A.O.C. and Providence are phenomenal restaurants well worth repeated hailing, they’re also representative of a more conventional style of fine dining. They’ve become standbys (a sign of consistency, by the way, that’s sorely undervalued), and our instinct as fans of newcomers like Night + Market and Baroo and Petit Trois is to think that the Beard Committee members are out of touch with L.A.’s current culinary climate. That they just don’t get our grittier, unique, strip mall-centric take on the genre.

Part of that is, or at least has been, a little true. But this is the time of year when I often find myself explaining to my own circle-mates a few of the award category rules that make some of our favorite chefs and restaurants impossible to nominate. For instance, for Outstanding Chef, the official rules state that, along with serving as an inspiration to fellow professionals and helping set industry standards, “eligible candidates must have been working as a chef for the past five years.” Outstanding Restaurant has an even more limiting time frame: nominated restaurants are required to have been in operation for 10 or more consecutive years. Ten years ago Ludo was cheffing at a Bastide (remember that place?) and Jon & Vinny ran some cool catering company.

There are other category complexities to consider, including one that the LA Weekly’s Besha Rodell smartly points out requiring voting members to have actually dined at a restaurant they’re nominating. This makes perfect sense, but think about most of the spots you visit when you travel? For us, they’re often the big-name favorites more than the esoteric little guys.

We have to remember that, while L.A.’s food scene is the most exciting that it’s ever been, it’s still very new. A decade-old restaurant? Well, let’s think—there’s A.O.C., and Spago, and well, Providence… Are you starting to get it? Our repeated frontrunners make sense, and they deserve the kudos for sticking it out in a town that is so often rightfully criticized for favoring the hot and new over the time-honored and delicious.

The future is bright. I think we can expect a heavy Los Angeles presence in these categories in the years to come as both our kitchen talent and their kitchens mature. Until then, it’s up to us to provide sustained support for our greatest restaurants. Find a place you love and become a regular. After all, you can’t have that (insert dish at Broken Spanish or Union or Cassia here) just once.

The final Restaurant and Chef Award nominees, as well as the nominations for the Book, Journalism, Broadcast Media, and Restaurant Design Awards, will be announced in San Francisco and on Twitter on Tuesday, March 15.

AOC, the Squad and Others Arrested in U.S. Capitol Abortion Protest