Home Uncategorized Why I’m Glad I’m A Californian Reason #371: Knowing How to Eat... 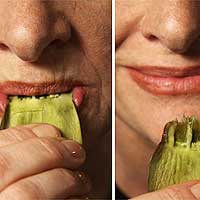 There’s a story I like to tell about the first time my husband—then my boyfriend—had dinner with my parents. They cooked artichokes. My mother, father, and I all dug in, remarking on how good the meal was and how awesome 2004 was going. Meanwhile my Texas-born beau was quietly giving himself a case of TMJ, putting entire leaves in his mouth and attempting to chew them whole. He gave up about halfway through (an admirable effort). It wasn’t until later that night that he confessed to me, “I don’t think I know how to eat artichokes.” I was flabbergasted. What do you mean you don’t know how to eat an artichoke? It’s an artichoke! Like an apple or a carrot or a Blenheim apricot! How do you not know?

This was, of course, an insensitive, elitist point of view—and my now husband was polite not to say as much.  But what I later came to learn is that my intimate knowledge of the globular vegetable is a particularly Californian trait. Growing up in the San Joaquin Valley meant that artichokes were as abundant as the wild turkeys strutting around in the field behind my house. I learned the delicate act of plucking a leaf off the choke and scraping the tender meat off with my teeth when my mother was still cutting my meat for me. The knowledge grew with me as I learned to tie my shoes, shuck corn, and make pancakes.

Until recently, I wondered if perhaps my husband was alone in his artichoke ignorance. (There were more than a few gaps in his culinary education that he’s since enthusiastically filled in.) But just last week a friend of mine in Chicago asked me how to grill artichokes. I wrote him out a simple recipe: Cut, steam, marinate, grill. Easy as artichoke pie. What I didn’t know was that he also needed instructions on how to eat the darn things. My friend and his wife did what my husband had done years ago—spend a miserable dinner hour gnawing on tough, stringy leaves. This pair also hails from Texas, so maybe it’s a Lone Star thing.

Regardless, today I received an email from the 99 Cent Chef, a local blogger who shares recipes for ingredients he scoops up at the 99-Cents Only Store. Apparently fresh artichokes have found their way onto the shelves at the discount grocer, and his latest blog includes tips on not only how to steam, but also how to eat the poky delicacy. I immediately sent it to my husband (though he’s now successfully ingested artichokes many times under my tutelage) and my Chicago pals. And if any of you out there wonder why so many of us like whittling our teeth down on indigestible leaves, you might want to check it out as well.