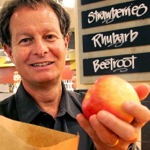 Decidedly opinionated and definitely polarizing, Mackey has emerged as a preeminent leader in the organic and fair food movement. I had the distinct pleasure of meeting him, if ever so briefly, while working at the Whole Foods Market Arroyo store about five years ago. What impressed me most—besides his wildly successful business—was his humility about it all, and his undivided attention. Much as Eddie Lin just recently opined about Huell Howser, I was surprised to find Mackey to be so human, and to find out how deeply he cared about his underlying good food crusade and all those it touched.

But don’t just take my word for it…

John Mackey Book Signings
Thursday, January 24, 4 to 5 p.m.
Whole Foods Market, 465 S Arroyo Pkwy., Pasadena, WholeFoodsMarket.com
(Proceeds of books sold through Whole Foods Market will go to their Whole Planet Foundation, a nonprofit organization that funds microloans in over 50 countries. The store will be donating an additional $1 per book that’s sold during the signing to the Whole Planet Foundation.)

Are Any Original In-N-Out Burger Locations Still in Operation?