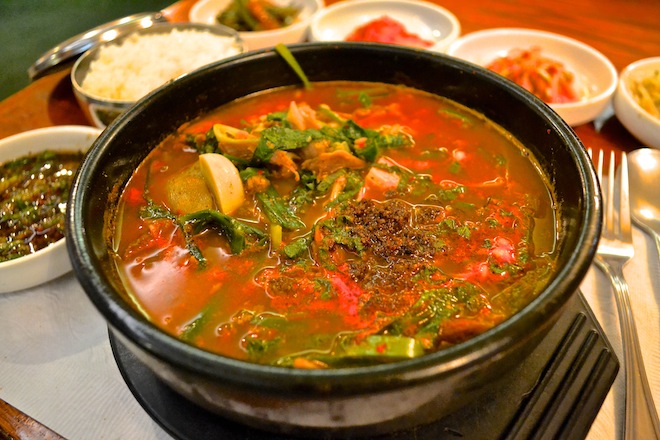 Korean food is not the first thing you think of when you find yourself on Van Nuys in the center of the San Fernando Valley. This main artery neatly bisects The Valley and is strewn with countless taquerias, watered down Chinese, tepid Thai, rental banquet halls, and fast food joints. When there is a decent Korean restaurant to happen upon, chances are it doesn’t serve huk yum so tang, or goat stew. But this old-fashioned country stew brings automatic cred to any Korean restaurant that offers it. Duk Su Jang Korean BBQ Restaurant in Van Nuys has that kind of cred.

They call it black goat casserole at Duk Su Jang, but it doesn’t resemble a casserole in the slightest—at least not in the Betty Crocker sense. Stew is a more accurate description.

The aroma or, I should say, odor of the goat will make its appearance a few moments before the actual stew arrives. The smell’s bouquet is pungent and spicy… but mostly pungent. It smells a little bit like a wet goat who recently binged on a field of chiles.

Bubbling like a witch’s cauldron, the clay pot shimmers with dark tender goat meat, green onions, and jalapenos. The broth itself is a deep brick red, telling of the spicy heat to come.

A strange blend of green onion, red chili, wasabi, and Chinese sha cha sauce is furnished as a side to help ease the extraordinary gaminess and muskiness of the black goat meat. Its effect was minimal.

This stew is a battle between two opposing forces. In the huk yum so tang’s case, it was a conflict between gamy and spicy. Sometimes gamy persevered and other times the heat was the victor. And if you like goat meat, you might be the winner too, but you just need to really, really, really like goat meat.