Home Uncategorized Where’d You Get That Frozen Banana? Bluth’s Banana Stand at The Grove 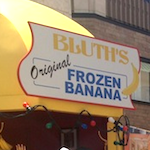 The line for a frozen, chocolate-covered banana at the Original Bluth’s Banana Stand—which has popped-up today at the Grove on Third and Fairfax—is, as of right now, 98 people long. It stretches from the entrance of J. Crew to past the entrance of Forever 21. It’s likely to grow as the sun shines and the temperature outside settles into a warm 75°. The stand will be stationed at the Grove until 7 p.m. tonight.

The pop-up banana stand—an iconic element in the televison show Arrested Development— is a stunt put out by Netflix to rally fans in advance of the release of the fourth season of the show, this upcoming Sunday. Judging from the looks on fans faces as they wait in line for a frozen banana, the stunt is working.

Three people we don’t know asked us to take their photo in front of the stand. There’s a guy in a banana suit at the ready for photo ops and the Grove has stationed four security guards in the vicinity of the stand, to keep the line moving.

Our thoughts on the frozen banana itself? We’re glad it was free.