Home Uncategorized Where to Get a Paloma in L.A. This Weekend 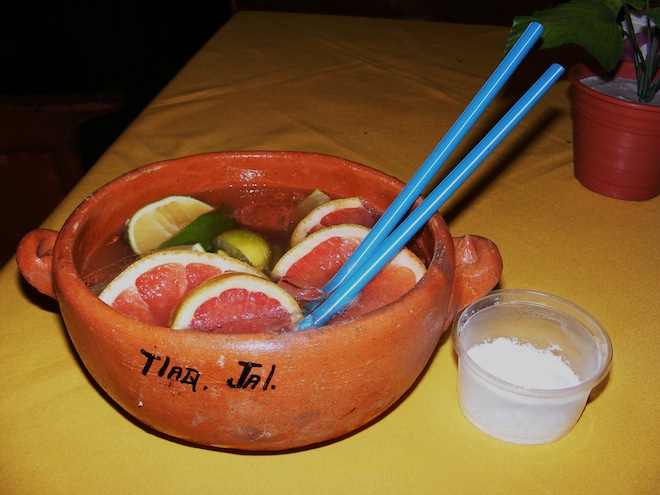 Most people don’t realize that Cinco de Mayo is not celebrated in Mexico outside of tourist zones and border towns. Another little known fact about Cinco de Mayo? The holiday’s preferred tequila delivery system—the margarita—is not really Mexican. It’s a tourist drink. The real national cocktail of Mexico—or as close to a national cocktail as Mexico has—is the paloma.

Should you want to throw a paloma party this weekend, the drink is simple to prepare: it’s 4 parts Squirt, or Toronja grapefruit soda, the juice of 2 limes, and 1 part tequila, built in a salt-rimmed Collins glass. It’s idiot proof, and a perfect drink to serve at your own drinko that is much less fuss than a margarita.

If you’re seeking a break from the nacho and frozen margarita set this Cinco de Mayo, here are 5 bars in the barrios of L.A. to drink palomas like a Born in East L.A. Mexican.

Hacienda Corona
This is as Mexican as is gets in L.A. with banda, curvy waitresses, and booze by the bucket and the bottle. There’s no special Cinco de Mayo event here, but grab a bottle of tequila, a bucket of ice and some Squirt and live the dream. Wear cowboy or cowgirl attire or you will be dancing with yourself—Billy Idol style.
11700 Victory Blvd., North Hollywood, CA 91606 (818) 506-8664

Don Chente Bar and Grill
This is a whole other level of paloma. Here, they serve the palomas in cazuelas (clay bowls) or cantaritos (clay cups). It’s called Jalisco style—which is just a paloma with the addition of orange juice and sliced fruit. You can also just stick to the original palomita. Rumor has it that chef Rocio Camacho has consulted on the menu—can you say, moles?
2144 E Florence Ave., Walnut Park, CA 90255 (323) 585-8900

La Golondrina at Olvera Street
Okay, so maybe there enough margaritas and nachos here to remind you of a nightmarish hangover at the Cabo airport, but ask your Mexican waiter to make you a paloma and take in the all-day-long festivities in L.A.’s oldest neighborhood in style.
17 Olvera St., Los Angeles, CA 90012  (213) 628-4349

La Huasteca at Plaza Mexico
Families will be out in full force, but duck inside the cantina bar in this established Mexican fine dining restaurant for palomas to beat the heat. The crowded square is a small piece of Tlaquepaque, Jalisco in L.A.
3150 E Imperial Hwy., Lynwood, CA 90262  (310) 537-8800

Premier Fiesta Mexicana
There are more mirrors in this joint than in an 80’s South American strip club, but this is a classic house for big seafood, steak plates, and live music. Order a molcajete filled with meats, cactus, and vegetables. Sit back, enjoy the showmanship, and sip enough palomas to muster up the courage to get up on the dance floor.
7300 Eastern Ave., Bell Gardens, CA 90201  (562) 806-9998