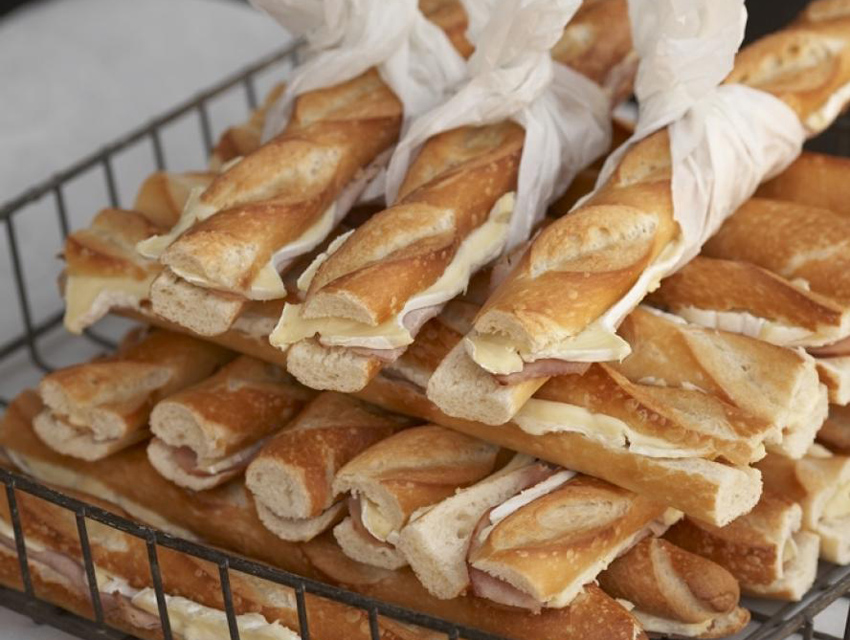 Each Friday, the Digest surveys the burgeoning L.A. restaurant scene and compiles this (highly unscientific) list of the newest, most hyped and heralded restaurants in town this instant. Whether big or small, near or far, these are the restaurants that have people talking. Whatever that means. Anyway, we recommend getting a seat at these places while you still can.

1. Joan’s on Third, Santa Monica
Omelets, ficelle sandwiches, and Chinese chicken salad for all! Beach dwellers, too, can now relish Joan McNamara’s gourmet goodies with the opening of a Santa Monica Joan’s on Third—or should we call it Joan’s on Ocean? Regardless, the veteran café owner has brought her crowd-pleasing omelets and fancy pastries to the Ocean Avenue South mixed-use development. Your beach picnic just got better.

2. Broken Spanish
It’s fitting that the former home of Jon Sedlar’s Rivera—which brought modern Mexican cuisine to the forefront in 2009—is where chef Ray Garcia is now serving up his own contemporary take on the foods of his heritage. Heirloom corn tortillas come smeared with beans or what the chef calls carnitas fat. The same pedigreed masa forms the bulk of tamales stuffed with lamb neck and oyster mushrooms or peas, favas, and the herb hoja santa. There’s a whole slow-roasted lamb’s draped in pickled onion and cabbage, but also a version of a chile relleno, stuffed with kale, lemon, and sauerkraut. How perfeclty L.A.

3. Cassia
We were crushed when Brynt Ng’s Spice Table closed in DTLA almost two years ago (to make way for a subway station). Finally, we have a reprieve: Cassia, his new Santa Monica spot, is now in soft-open mode. A collaboration between Ng, his wife Kim Luu-Ng, Josh Loeb and Zoe Nathan, Cassia has the chilled seafood bar and charcuterie plates you’d expect from a French brasserie along with Ng’s take on Southeast Asian specialties, like kaya toast, jellyfish salad, and pot-au-feu, what Ng calls “a precursor to pho” that includes short ribs, bone marrow, and veggies. Zoe are Laurel Almerinda are doing the desserts.

5. Simbal
L.A.-native Shawn Pham returns from a four-year sojourn in Vietnam to open Simbal in Little Tokyo. Sweetbreads glazed in fish sauce and a short rib pot pie perfumed with lemongrass an annatto reflect Pham’s pedigree, which includes stints at Sona, Craft, and the French Laundry. Fermented tofu-marinated duck and tamarind fish soup bobbing with far-flung aromatics like sawtooth herb and rice paddy herb speak to his time in the Far East. Look forward to sherry cocktails and tropical sweets.

7. Maré
Hidden in a small space behind Greenspan’s Grilled Cheese is the newest project from chef Eric Greenspan, an intimate European bistro called Maré. Pass through the sandwich shop up front to enjoy a quaint patio and dishes like clams in vadouvan green apple broth, fried smelt, and skirt steak with chimichurri sauce. The menu is as compact as the space, but packs a variety of bold flavors.

8. Jon & Vinny’s
One of the most anticipated openings of the past few weeks was Jon Shook and Vinny Dotolo’s all-day Italian restaurant on Fairfax, and we’re still excited. The menu focuses on classic red-sauce fare, including crisp-crust pizza, fresh pasta with bolognese, and meatballs. There’s tiramisu for dessert. Tucked behind the dining room is where you’ll find Helen’s, a small wine shop.

10. Chavela
Hollywood gets its own incarnation of the gourmet plant-based (or what we used to call ‘vegan’) trend, here a pan-Latin riff on the genre from chef Rachel Car (formerly of Cru) and the team behind Los Balcones de Peru. Peruvian-style rocoto barbecued sweet potato, mushroom and cauliflower chicharron, and aji amarillo-spiked mac and cheese round out the menu. A cocktail list by Joe Black is anchored by the restaurant’s refreshing namesake, Peruvian-style sangrias called chavelas. Salud.