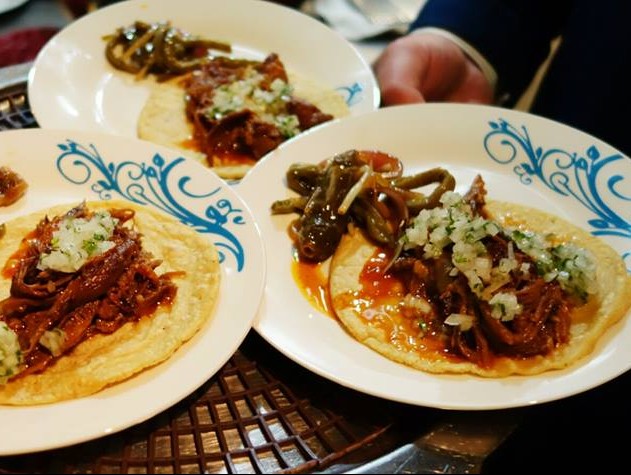 1. B.S. Taqueria
When a chef of Ray Garcia’s prowess takes on tacos, there’s bound to be excitement. Located in the former Mo-Chica space, this casual sister restaurant of the soon-to-open Broken Spanish concept offers taqueria classics like toasted chiles toreados and cactus salad, as well as a variety of tacos (everything from carne asada to clam and lardo) served on freshly milled corn tortillas.

2. Bombo
Renowned chef Mark Peel has fired up the steam-kettle pots at his new quick-service seafood restaurant inside Grand Central Market, where you’ll find dishes like steamed clams with sausage, curried shrimp with squash and flaxseed rice, and hearty lobster-broth fish stew with bacon and potatoes.

3. Ox & Son
You’d be forgiven for overlooking the stellar cooking of chef Brad Miller, given that he’s been holed up in Topanga Canyon at Inn of the Seventh Ray for the past few years. But now Miller is set to make a big splash in Santa Monica with Ox & Son, a Southern-tinged, farm-to-table diner offering soulful dishes like chicken-fried duck confit and Benton’s ham and corn griddle cakes. Kale-weary Westsiders rejoice.

4. Birch
Former Waterloo & City chef Brendan Collins is back in the game with an intimate Hollywood restaurant that’s all clean lines and natural wood. The menu pays homage to the Brit chef’s culinary sojourns, including a take on tikka masala made with monkfish and rabbit baklava with dates. Paired with a suave cocktail list from a M.B. Post vet, it’s an exciting respite off tourist-trod Hollywood Boulevard.

5. Hinterland
Joe Jonas might be better known for his smooth pop singles rather than his entrepreneurial acumen, but that hasn’t stopped the Jonas Brother from launching a swank and secretive (read: no website) restaurant in Santa Monica that takes cues from the cuisine of the coastal Carolinas, including takes on shrimp and grits, and roasted pork chops.

6. Odys + Penelope
Fresh off the closure of their acclaimed fine-dining restaurant Hatfield’s, husband-and-wife duo Quinn and Karen Hatfield wasted no time launching Odys + Penelope, a more casual, grill-centric restaurant that channels the type of cooking the Hatfields like to eat in their own home. There are Argentinian-style and Uruguyuan-style grills, offering different levels of char for meats and vegetables, along with a churrasco and a smoker. Don’t forget Karen’s renowned dessert items either.

8. Steak & Whisky
Chef Tin Vuong’s dominance of the South Bay dining scene continues with the opening of his new American-inspired steakhouse in Hermosa Beach. Expect riffs on classics like steak tartare with red curry and Kurobuta pork short rib with white polenta. As the name implies, there is an ample selection of Japanese whiskies–as well as wine, beer, and seasonal cocktails.

10. Knuckle & Claw
Silver Lake is getting a dose of East Coast-style seafood with the arrival of Knuckle & Claw, a quaint Martha’s Vineyard-esque restaurant offering buttery lobster rolls (stuffed with a quarter-pound of Maine lobster), clam chowder, grilled cheese, whoopie pies, and more. Owners Nikki Booth and Chloe Dahl (granddaughter of British author Roald Dahl) hope to have their beer and wine license soon, but for now it’s Fentimans soda on the sunny patio.