Home Uncategorized Where Michael Cimarusti, Ricardo Zarate, & Other Great Chefs Get Their Sushi... 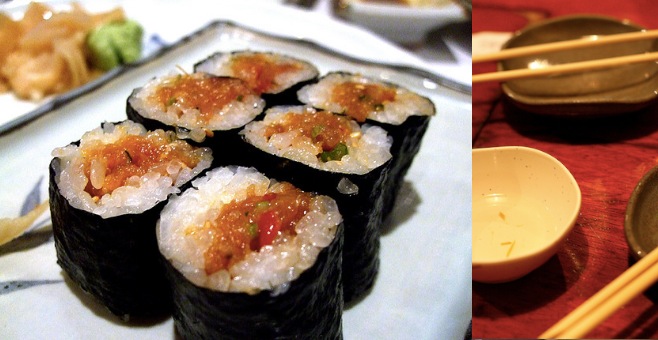 Sometimes even great chefs need a night off. So, where do they go when they want sushi? For sushi week, we went to four chefs who know their fish, but don’t serve sushi themselves. Michael Cimarusti has done incredible things with Santa Barbara spot prawns and whole bass at Providence on Melrose; Ricardo Zarate recently opened a restaurant named after an enormous fish, Paiche; Sal Marino has been doing what some call Italian sashimi, or crudo for years at Il Grano; and Damon Gordon at downtown’s Water Grill deals with towers of lobster and shrimp all day long.

The first thing we want to point out? All four chefs were asked separately and individually, and all four first mentioned Sushi Gen as their go-to sushi bar. Located in downtown’s Little Tokyo, Michael Cimarusti said it was his favorite place at the Honda Plaza because “they go through their fish like lightening because it’s always busy.” Cimarusti also likes to hang out at Urasawa, in Beverly Hills. “That’s the true pinnacle of L.A. sushi, or really of any sushi in the country. People say it’s expensive, but when you compare it to a plane ticket to Tokyo—which is the only place you might get better sushi—it’s quite reasonable.” When asked if he has a favorite fish, Cimarusti said, firmly, “I’ll eat anything but Bluefin.”

Ricardo Zarate (Picca, Mo-Chica) has been hanging out on the Westside lately because his newest restaurant, Paiche, is in Marina del Rey. For Westside sushi, Zarate likes Kiriko on Sawtelle. “I love it because it’s a really small place, and almost hidden.” For modern sushi on the Westside, Zarate has been hanging out with Nobu, “Have you been to Nobu in Malibu? It’s just really good. Nobu is classic, very modern, but classic.”

Sal Marino (Il Grano), a maestro with both tomatoes and seafood, goes to Sushi Gen when he really needs a sushi fix. But Marino sighs when he says his go-to for years and years was Mori sushi on Pico. “I miss Mori so much (he sold his restaurant two years ago). He’s become a dear friend. He really understands the whole bite: he milled his own rice for the next day, after service each night. He found the best hand roll wrapper that was from one place in Tokyo. He only buys ginger from a part of the world where it is spring that time of year. When you think of great sushi, you think of the fish, but 80% of that bite is rice. Mori understands sushi.”

Damon Gordon is rather new to Water Grill, one of L.A.’s oldest seafood restaurants, but he’s already impressed Los Angeles magazine restaurant critic Patric Kuh. Besides Sushi Gen, he says King’s Fish House in Calabasas is in his top ten.