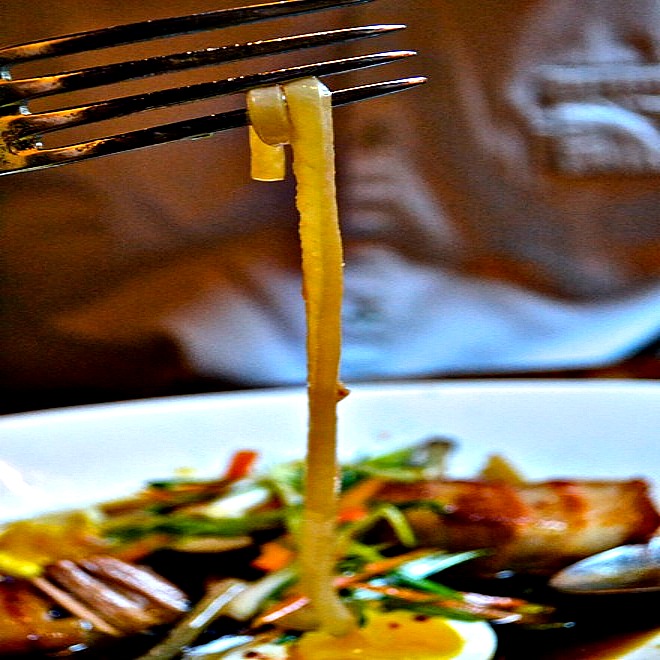 The idea of a pork skin noodle might come off as gimmicky as, say, the bacon taco shell. But this protein-packed noodle variation is more than just a THC-generated innovation.

Fashioned from strips of pig epidermis, these rare noodles have been spotted on the menu as a soup at Holeman & Finch Public House in Atlanta, and as a full plate of pasta at Chris Cosentino’s Incanto in San Francisco. (The fearless chef whipped up a plate of pig skin noodles with a spicy wild boar sofrito sauce for his “Childhood Menu”—which explains a lot about Cosentino.) Even Andrew Zimmern of Travel Channel’s Bizarre Foods slurped up this swine skin spaghetti and deemed it “amazing”.

Though the mock noodles may seem like a nose-to-tail novelty these days, they have been twirling around the Asian community for a while. But even there, they’ve appeared more as a garnish that an actual noodle substitute. In Nanjing, a sub-provincial city of China, there is a pork skin noodle soup that includes wide strips of fried pig skin which get delightfully soggy and bloated in the broth. But this soup also includes lamian or lo mein type noodles. The Vietnamese have bi which are skinny strips of pork rinds that include a bit of fat and meat and are attached to the skin. These shredded pork rinds are sometimes called pork noodle and incorporated into rice rolls, as in the bi cuon, or Vietnamese broken rice dishes.

How? First, he cooked the skin in salt water. After the sheet is cooked and cooled, it’s noodle-fied, or cut into lengthy strands. Next, pork bone is simmered for 20 hours to achieve a seriously savory broth. Then, large cubes of pork belly that have been confited in lard are seared in a pan till lyrically crisp, and added to the ramen.

Though they are more similar to udon than ramen in texture and size, the pork skin noodles are slick, tender, and chewy—with that desired Asian Q-ness—followed by a creaminess and a tell-tale stickiness that gives away their true porcine DNA. The flavor of the skin is nearly neutral, making it a slave to the bold pork broth, which has been spiked with lemon grass, kaffir lime leaves, serrano, soy sauce, lime, and sake.