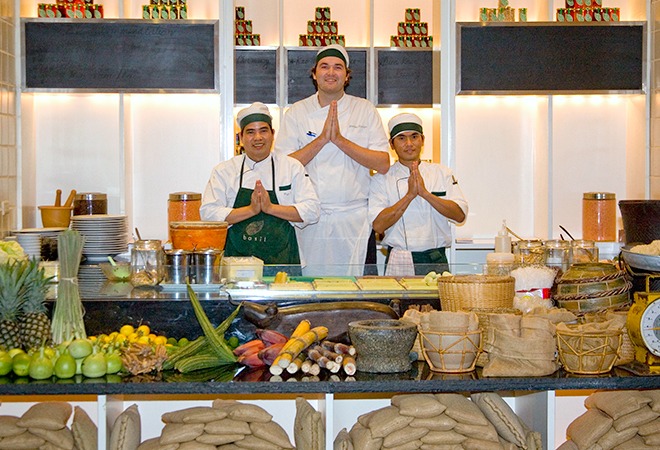 The Austro-Thai connection for executive BierBeisl chef Bernhard Mairinger isn’t as far-fetched as you’d think. His brother worked at the Austrian embassy in Bangkok, and Mairinger decided to study there after giving his final notice at Patina in January 2011. He had received an offer from a small luxury hotel kitchen in Koh Samui, a small island outside of Thailand, but when that plan boiled over due to complications Mairinger reached out to a friend who worked as the GM of the Sheraton in Bangkok. Mairinger expressed his desire to cook in a Thai restaurant, so his friend quickly enrolled him in a training program.

“I had always loved Thai food, but it was an eye-opening experience eating and cooking it in its place of origins,” says Mairinger. “The curries are made from scratch. In certain areas you can pick kaffir lime leaves off the streets. Instead of ‘bread and butter’ there was mieng khum, a Northern Thai specialty of bitter leaves filled with dried shrimp, peanuts, coconut flakes, diced ginger and lemon with tamarind sauce. And after eating from the little fruit carts, you swear to yourself you’ll never eat any other fruit again.”

The challenges were obvious: an Austrian giant (Mairinger is almost 6 feet, 7 inches) working in a Thai kitchen without speaking a word of the native tongue. Since everything was expedited in Thai, Mairinger had to listen for certain words so he’d know to fire up an order of chicken or pork.

Following his return, another friend introduced Mairinger to Si Laa, a family-run operation lead by Ben Yenbamroong, the aunt of Night + Market chef Kris Yenbamroong. Soon after meeting, Mairinger and Yenbamroong began discussing details for a potential collaboration, and the opportunity was made easier once Mairinger closed BierBeisl in Beverly Hills at the end of 2013 in order to relocate to a bigger space on the Westside. Si Laa, with its white tablecloth dining experience, was a natural place for Mairinger to finally test out his Thai prowess.

The evening’s $65 five-course prefix menu will feature a choice of a Thai or Austrian dish (sometimes the lines are blurred) with the hope that pairs of diners will simply order all ten dishes.

One further note: There are no confirmed reports about BierBeisl’s new Westside flagship location, but stay tuned for the grand opening of BierBeisl Imbiss (German for snacks), Mairinger’s new restaurant and bakery that will open this October in downtown’s Spring Arcade.