Home Uncategorized What’s in a Name? You Son of a Gun! 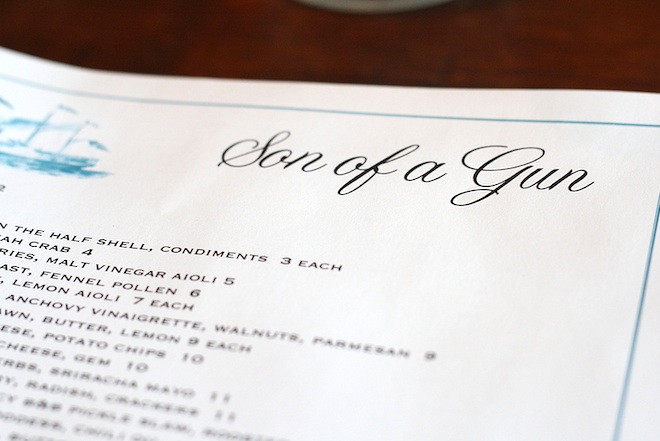 The phrase, “son of a gun,” is sometimes thought of as a derogatory term. Some sources claim that it originated in the 18th century, when women were brought aboard a ship to entertain the men. If a woman got pregnant, she would gave birth on the top or “gun deck” of the ship. When a man didn’t claim a child, the birth certificate would list “The Gunner’s Mate” as the father.

Helen Johannesen—director of operations at Animal, Son of a Gun and Trois Mec restaurants—all from chefs Jon Shook and Vinny Dotolo; the latest in partnership with Ludo Lefebvre—says that the phrase’s origin is only part of the reason they named the restaurant Son of a Gun.

“It’s true, what “son of a gun” means, but we were more generally wanting to reference a nautical term, since Son of a Gun is a seafood restaurant,” explains Johannesen. “It was the first name we thought of, even before we’d started construction on the restaurant, because it was something Vinny’s grandfather used to say a lot, either when he was frustrated or in otherwise polite conversation.” She goes on, “We like that the name doesn’t tell you what to expect at the restaurant, it’s purposefully vague, but it has a rebel aspect to it.”

Anyone who has visited Son of a Gun knows that the walls are covered in nautical memorabilia. These aren’t just flea market finds; they’re actual souvenirs and trophies from Shook and Dotolo’s grandparents, who live in Florida. It’s another nod to the way family influences hospitality, and proof that Son of a Gun’s lineage is treasured.

Everyone Is in Love with L.A. and the James Beard Awards Confirmed It