Home Uncategorized What’s in a Name? Tony’s Darts Away 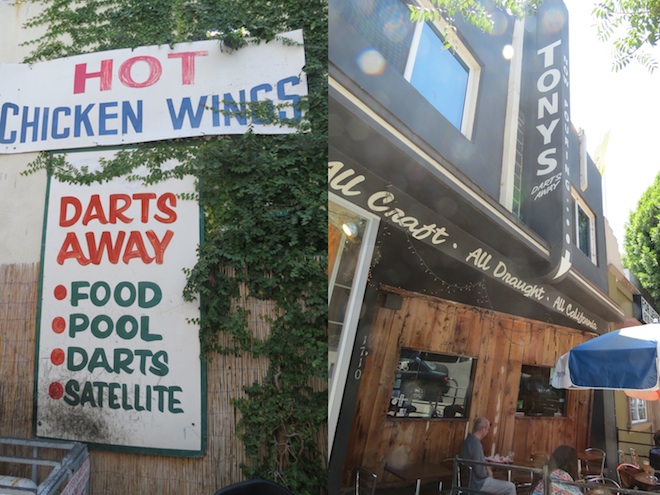 Photographs courtesy of Tony's Darts Away

What’s in a Name? is a series about the untold stories of restaurant monikers.

Tony Yanow owns and operates three craft beer institutions in L.A.—Mohawk Bend in Echo Park, Golden Road Brewing in Glendale, and his first establishment, Tony’s Darts Away in Burbank. It seems like an odd phrase for the name of a beer bar. And not even the regulars seem to know why it’s called Tony’s Darts Away. So I figured it was time to go to the source. Here’s what Tony says:

This history is what I’ve gathered through word of mouth. In the early of days, the bar was called the H&H, and that was in the ’60s. But it wasn’t ever licensed. Then, this guy named Tony bought it, and he owned it in the early ’70s. And he operated it much like a bookie. It operated like a social club. They had dart boards and people would go and place bets, it was the big betting spot in town.

I found a public record from 1978 that says there was an infraction there, but there was before their was an actual license. So it seems like they got cited for something and then they applied for a beer license—and that’s when it was legally established. All I know is that that Tony owned it for quite awhile, and there were always dart boards on the walls. There’s a sign from those days that we still have, that’s hanging near our back door. Almost no one ever sees it.

In the mid to late ’90s Tony fell into bad health and gave the bar to his daughter Maria. She kept the name Tony’s Darts Away. But really, she didn’t want to own a bar. She never took care of it and it fell into disrepair. Eventually, she sold the bar to Daniel Avilla. When he bought it, he didn’t make any repairs. The only thing he did, which is interesting, was take white primer paint and paint it over ‘Tony’s’ on the sign. But that didn’t last long because was primer paint.

When I bought it almost four years ago in 2009, it was just called Darts Away. But a lot of the regulars called it Tony’s. For three weeks before I bought it, I’d sit at the bar and talk with the regulars and try to understand if they had any attachment to the name. They all called it Tony’s or Darts Away. Eventually, I decided not to change the name. But I wanted to turn it into a casual place where people would linger and just hang out. I guess it works out that my name is Tony.

We’ve grown the business quite a bit since those days. When I first walked in there, five years ago, there were four dart boards up, two steel tips and two plastic tips. There’s only one dart board now, and it’s just for looks, because when it’s gets busy it would be dangerous to have darts flying through the air.