Home Uncategorized What’s in a Name? Talking Trash in Hollywood 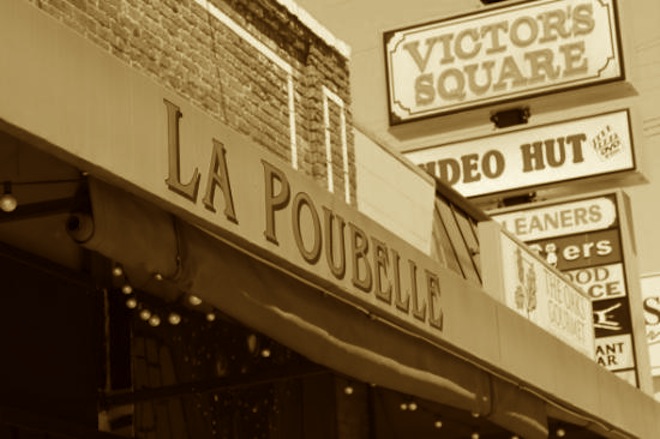 Restaurants are full of stories. Often, the first story comes in the form of naming rights. In What’s in a Name, we ask restaurateurs and chefs: How did you come up with that name? Here, we’ll reveal the tales that give restaurants their own sense of place within L.A., for better or worse.

The Upright Citizens Brigade Theatre holds together a string of restaurants along Hollywood’s Franklin Avenue. If you’ve been to the improve-focused comedy club, you’ve probably passed by La Poubelle, a candle-lit French bistro. And, if you remember anything from high school French, you may have wondered why anyone would name their restaurant after a trash can.

Reached by phone, owner Françoise Koster says it was as simple as the flip of a coin.

My parents started the restaurant in ’69, when Franklin was a bad neighborhood, full of prostitution and drugs. My mother wanted a crêperie and my father wanted something more serious, something that honored his involvement, in the early ’60s, with an underground, illegal jazz club and brothel in London. So they flipped a coin, and since my mother won, she got the crêperie and my father got to name it in honor of that seedy London club.

Koster goes on to recall how her mother, a genteel Frenchwoman and father, a Dutchman, raised her at the restaurant, which eventually started serving more than crêpes. “I learned to ride my bike out front as a kid… the restaurant was my living room,” she muses. Now that her parents have retired, Françoise runs the place for this, its third generation of clientele. As it did in the ’70s when it first opened, La Poubelle continues to attract a guest list of Hollywood types, aspiring entertainers and often, a funny man from next door’s comedy club. Perhaps talking trash over moules frites at La Poubelle will always be in fashion.