Home Uncategorized What’s in a Name? Niki Nakayama on the Origins of n/naka 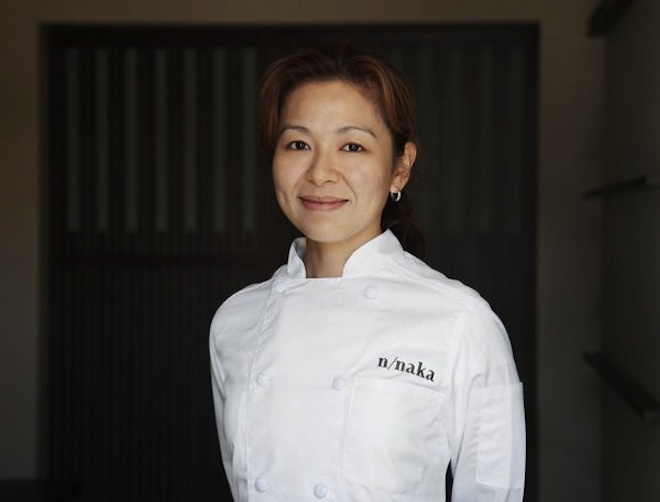 What’s in a Name? is a series that tells the untold tales of restaurant monikers.

Along an otherwise nondescript stretch of Overland near West L.A., n/naka holds up a small corner near Palms. But there’s a bigger force at play here, and that lies with sushi chef Niki Nakayama’s passion for fish. At first, it seems obvious that the restaurant is named for the chef’s first initial and last name. But there’s more to the story than that:

Basically, you have to know that all Japanese last names, when you break them down to their individual characters, have something to do with nature. So, when I was working with my sister in Arcadia at her restaurant, I called my pop-up Inaka, which is sort of taken from our last name and means “countryside.” It became pretty well-known, so when I found my own space in Palms, I wanted to name it something similar so that people would relate the two.

My last name, Nakayama, means “inside the mountain,” the first part, “naka-” means inside, and the last part “-yama” means mountain. So my restaurant is kind of within me in a way, it’s a deep part of me… I was born in L.A. and my parents have always been fish distributors. I, at first, didn’t want to learn their business because I grew up to have such respect for fish, you know? And I didn’t eat raw fish until I was 11. But then I came to have such reverence for it that I never wanted to cook it. Your relationship with a food changes when you cook it. And there’s a mystery to fish, to raw fish, that makes it worth knowing in an intimate way.

n/naka serves dinner Tuesday through Saturdays. Reservations are taken in advance, up to two months to the calendar date. A traditional omakase or chef’s tasting menu is available in addition to Chef Nikki’s modern kaiseki menu.

Take-Out Tip of the Day: In-Demand Sushi and Sashimi from N/naka

3 New Restaurants You Have to Try This March