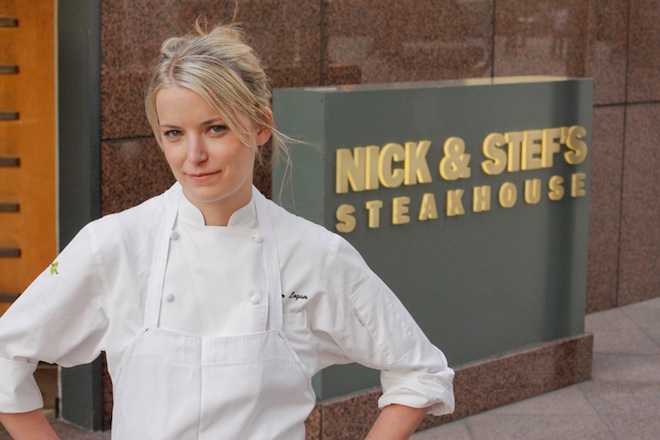 What’s in a Name? is a series about the untold stories of restaurant monikers.

Thousands of people pass by Nick + Stef’s, the nearly 15 year old steakhouse run by restaurant mogul and chef Joachim Splichal, each work day. The restaurant does a brisk business in power lunch, and also caters to a well-heeled pre-theater crowd. But who are Nick and Stef? And do they even like steak? We asked Splichal for the story.

In 1997, the building housing Nick + Stef’s went under construction. There used to be a restaurant there called Steps, and it wasn’t doing well, so the owner of the property came to me and asked if I wanted to do another restaurant. I thought about it, and decided to try doing a modern steakhouse. Nick + Stef’s started the modern steakhouse movement, where chefs went into what a steakhouse is and kept it classic, but cleaned it up. I knew I wanted leather booths really good quality meats. We eventually decided to keep the menu simple: 12 steaks, 12 vegetables; 12 potatoes; 12 sauces. A dozen of each.

Then, I started doing research on steakhouses in the U.S. I found that most of them were named after a person. Maybe it was the owner, maybe the owner’s wife, or something like that. At the time, my kids were two or three years old. Nicolas and Stephan. So I though, well, let’s name it for them. That’s how we got Nick + Stef’s.

In the beginning, I had installed small children’s booths and chairs for the kids. They loved it. Obviously, they grew up around food, but they also happen to love steak. They still eat there quite a bit. They’ve always loved the macaroni and cheese and the caesar salad done at the table. Now that they’re 17 and a half, they’re learning to be businessmen. They came to me recently and said, ‘Ok, we want a $1 for every steak you sell.’