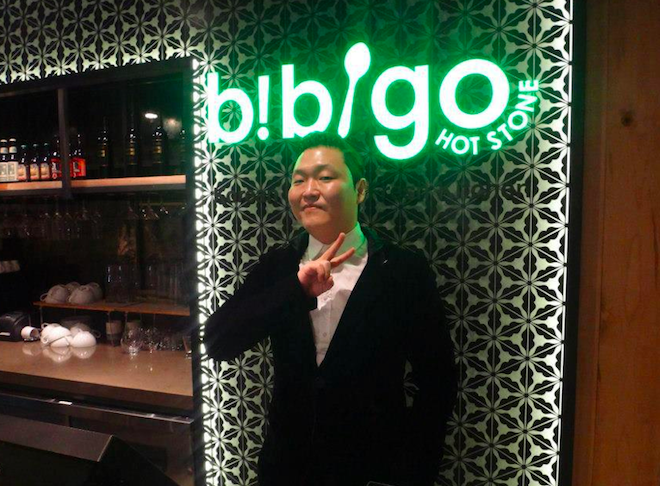 What does a mother father gentleman eat after a night of twerking to Gangnam Style? If you are Psy, the Korean pop megastar who blew up YouTube, then you’ll likely be hankerin’ for bibimbap, kimchi stew, spicy pork ribs, and other K-bites from bibigo. The international chain of casual, modern Korean restaurants has local locations in Westwood, Century City, and Beverly Hills.

Psy’s new video “Gentleman” features a scene in which he joins a lady friend at a Korean pub. The pair go wild on the food and seduce each other with thick soup noodles and phallic foods. Psy then sprays K-beer all over the joint as if he just won the Stanley Cup.

There aren’t any noodles on Psy’s bibigo menu, but there might be a prize in it for you if you eat at bibigo from now until the end of July. Play the scratch card and you may just win a trip to Korea.

It’s been said that these dishes on Psy’s menu at bibigo are his personal favorites:

Warning: doing Gangnam Style on a full stomach is not recommended.

P.S. Psy is still looking for a chef.