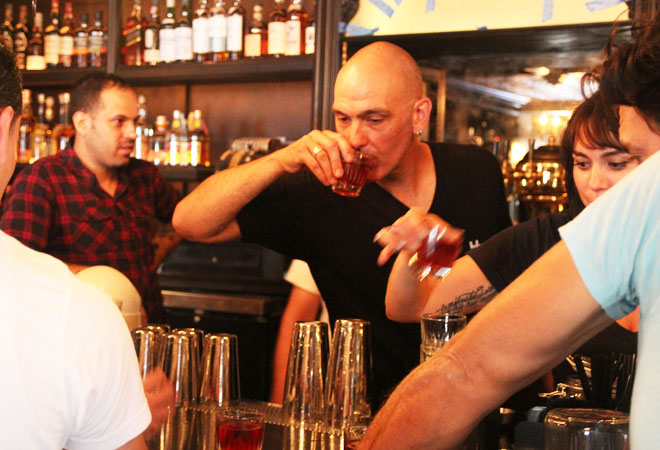 If you’re in the L.A. booze biz and have always envied those hard-core cocktail geeks who make the annual trek to must-do cocktail conference Tales of the Cocktail in New Orleans, finally there’s now something closer to home. This Monday kicks off the inaugural Golden State of Cocktails, California’s four-day cocktail industry-only event (January 27 to 30) that features seminars, spirit tasting rooms, take-away stations (i.e. photobooths or cocktail bottling stations), and, naturally, epic bar crawls (open to the public). The best in the booze biz will be in attendance, either leading or getting schooled in “labs,” guest bartending, or hanging out at the Golden State bar.

If you’re not in the booze business, there are a couple of Golden State of Cocktails’ Imbibe Magazine-sponsored bar crawls with $4 drink specials. On Tuesday the downtown crawl will take you through Villains Tavern, Las Perlas, King Eddy, and Honeycut. Hollywood on Wednesday navigates you through Sadie, Spare Room, No Vacancy, and Sassafras.

Contrary to what you may think about a bunch of bartenders getting together, it’s not all debauchery. At GSoC, the real fun lies in those 45- to 90-minute labs where cocktailers can learn everything from how to blend their own whiskey to how to open their own bar.

“We wanted to stay away from the status quo in cocktails and hospitality education by offering varying types of content throughout the week,” said GSoC event producer Skyler Reeves. “With this in mind, we reached out to more than 100 different presenters in order to deconstruct everything that bartenders and managers do. We included cocktail-centric things like creating cocktails and tasting spirits, but also programming like tax preparation and media training.”

With so many offerings, it may be overwhelming to pick which seminar to attend so here are a few favorites as described by their respective speakers.

“The Intersection of Flavor: Cocktails & Food” with Devon Tarby and David Nayfeld
Bartender Devon Tarby (Proprietors LLC) and Chef David Nayfeld (Eleven Park Madison, Fifty Seven) will focus on how to create drinks that are meant to be consumed along with food. “We will focus on one ingredient prepared three ways, paired with a spectrum of different cocktails,” said Devon. “Regarding the cocktail development process, I’ll focus on a few key elements: ABV, temperature, texture, and flavor. Within the flavor component, we will explore three different pairing approaches: complements, contrasts, and conundrums (i.e., flavors that are neither complements nor contrasts, necessarily, but somewhat inexplicably simply work).”

“Tech Toys: Making Drinks With Science” with Alex Day and Gabriella Mlynarczyk
This will be a nerdy hoot for all those cocktail tech geeks out there. Alex Day (Proprietors LLC), who uses a centrifuge to make cocktails, and Gabriella Mlynarczyk (Ink) of Hot Toddy Jello shots fame will demo how to use scientific gadgets behind the bar. “For the main body of the lab we will have three stations–that will house ISI guns, Cryovac, and immersion circulators,” said Gabriella. “Then we’ll demo two techniques and offer samples of various ingredients made via each technique.” There will be flash infusions with an ISI, rapid Oleo Saccharum with a cryovac, and barrel aging cocktails with an immersion circulator. Word has it that a kegged cocktail will be on tap “that way attendees can help themselves through the lab rather than us  having to shake or mix drinks for them during the lab time.”

“Beer in the Cocktail Bar” with Christina Perozzi
With the rising popularity of craft beer, beer taps are no longer a throwaway feature behind a bar and quality brew is finding a place in the best cocktail bars. Beer Chick Christina Perozzi will teach bar pros all about beer basics like how to pair, recommend and even use craft beer in cocktails. “Industry professionals will be introduced to the particular flavors in varied and rare craft beer styles through a sensory training and taught how to think about beer as a cocktail ingredient with exotic nuanced flavors and as more than just the fizz,” said Christina. Naturally, she’ll be using a variety of beer styles from Goose Island Beer Co. as well as beer cocktails to make her point. Otherwise, how will you learn?

“Consulting Dos And Don’ts” with Marcos Tello, Aidan Demarest, and Vincenzo Marianella
Marcos and Aidan, who consult together as Liquid Assets, and Vincenzo (Copa d’Oro) will discuss the pitfalls and successes of consulting and how to get started. The trio have found ample success in bringing L.A. bar programs like L.A. Athletic Club and Trattoria Neapolis to that next level and have plenty of stories to share. “We’re going to have a candid conversation about how it works for us, and brand liaisons and dealing with owners and also picking your owners as well as them picking you,” said Aidan. “We’ll talk about our personal journey and how we became consultants and when the timing is right to become consultants. Because I think that’s important thing for people these days because they dive into this without enough experience under their belt, they fail.” But best of all? They’ll be serving up Mezcal Bloody Marys as their talking point. “I wanna touch on how a Bloody Mary mix is a great do for consulting because it lasts forever, it’s cost effective,” said Marcos.

“Hospitality: Creating a Culture” with Dushan Zaric
Dushan Zaric, owner of award-winning New York bar Employees Only, will lead a seminar on the importance of hospitality in a bar’s success. “My whole objective is to teach people that return business comes from that emotional dynamic that happens when a guest approaches a bar or restaurant,” said Dushan. “And that human dynamic is what we all crave, the approval of the bartender or restaurant owner towards the guest. We want you to be here, we want your experience to be great.” He’ll also teach how to work a shift without getting upset and that hospitality starts from the top, all while serving up “Cabronis,” a Tequila Cabeza Negroni.