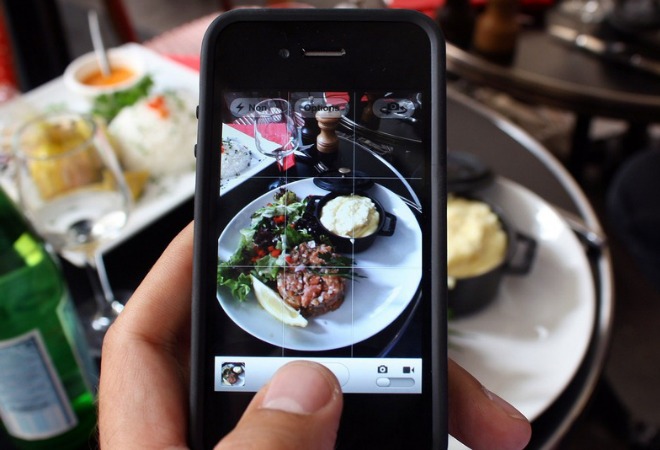 Last week saw a series of articles that challenged the use of technology at the dinner table. Eater National reported on a study conducted in NYC which said iPhones were slowing down service, roughly doubling the time time of a meal and causing food to become cold (and sent back to the kitchen). First We Feast said Applebee’s would be enforcing “No Tech Tuesdays” (despite its future plan to install thousands of tablets for diners). And finally, restaurant critic Pete Wells of the New York Times coined a term “camera cuisine,” which defines it as “any dish inspired by a picture or aspires to be one, [and] in purest form it is both exquisitely photogenic and peculiarly bland.” Wells argues that chefs are increasingly aware of these close-ups, which in turn impacts the actual food. More time is spent on plating, he says, and kitchen cooking areas have been downsized for this purpose.

Do these same reports hold true in Los Angeles, a place steeped in obsessive Hollywood paparazzi culture? Does it make any difference that L.A. is home to a strong food truck scene? A film like Jon Favreau’s Chef, extols the virtues of photo-sharing as something communal (and also essential for business). Did the presence of cameras and social media change the way Ricky Peña or Roy Choi approached their actual food? Doubtful. But can the same be said for restaurants of a different nature? Is it riskier for a brick and mortar to allow the same type of candid photo-sharing that you might find at Kogi or Ricky’s Fish Tacos?

We reached out to some of L.A.’s most respected chefs—Sqirl‘s Jessica Koslow, Bucato‘s Evan Funke and Bestia‘s Ori Menashe—to see if these assertions rang true.

Ori Menashe, Executive Chef, Bestia:
“Personally, I don’t photograph any of the food I send out. I’d rather the dish go out hot and at its peak, otherwise it has sort of lost its soul. At the same time, I think photography is good for restaurants because it creates something for your customers that are actually fans of the restaurant. They can see what’s going on when they’re not there. Photos are art for people, you know? In general, I think the food world needs to be toned down a little bit more. People need to have fun with it.”

Jessica Koslow, Owner/Chef, Sqirl:
“The biggest issue about photography during meals relates to service, because it can cause delays. But I also understand that the camera is a memory tool for a lot of people. We are part of the camera-ready generation, and I do believe it should make chefs think about how the food is plated. Having said that, does it ever alter the way I make a dish? No, because for me it’s a component of the whole. I think about texture, flavor, acid, and balance. Brown dishes aren’t “pretty” but we still serve them. We served pork belly with kimchi on top of a spring onion pancake. It was absolutely delicious. It was a dish I decided not to post a photo of, but I didn’t change the flavor profile just because of its color.

With a restaurant like Sqirl, which serves lunch and breakfast, the sun is out and the setting is camera-ready. I was at Rustic Canyon the other night and the lighting is very low. Everyone knows how good the food is there, but a photograph of a dish would suffer even if the plating is really great. I’ve heard of some restaurants that light up a portion of their table so a customer can take the best photo possible.”

Evan Funke, Executive Chef, Bucato:
“I have a no-camera policy [at Bucato] for several reasons. We put a lot of love and thought into this style of pasta, where everything is hand-crafted. When we send out a dish, a customer has about 90 seconds to enjoy the pasta in absolute perfect form. If someone whips out their camera and takes a couple of minutes to shoot a mediocre photograph, they’re doing a disservice not only to themselves, but they’re disrespecting what we put so much effort into. There are a lot of bad photographers out there, too. I don’t want poorly-taken pictures of my food out in the ether, especially since Yelp has a special meaning in Los Angeles compared to other places around the country. And finally, I want to give people the opportunity to unplug and unwind. We want to create a sanctuary for people to enjoy each other’s conversation, and actually eat dinner together.

I’m in favor of social media for whatever application somebody feels the need to use it for. It has connected the entire food world, and we wouldn’t know what chefs like Rene Redzepi are doing minute-to-minute. It’s a huge point of inspiration and competition. At the same time, I’m into what’s behind the food, and not necessarily what it’s supposed to look like. I rarely garnish things. Our food here is 90 percent ingredient and 10 percent technique, so we are really in service of the ingredient.”