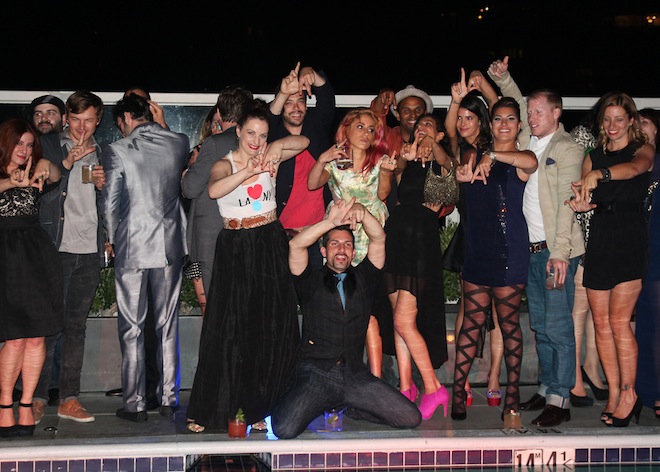 The craft cocktail scene really started to gain traction in L.A. back in 2007 with the debut of Cedd Moses’ downtown whiskey bar Seven Grand. Cut to six years later and a well-done cocktail program has become the hallmark of a quality bar and restaurant. Even established Los Angeles venues—like Kate Mantilini, Chateau Marmont and Melisse—have realized this and played catch-up by installing new cocktail programs.

But Hey Bartender, a new documentary which begins a week-long run today at Sundance Sunset Cinema (or get it on iTunes), shows how we got to this place in cocktail culture in the first place. The recent cocktail revival started in the ’80s with one man, King Cocktail Dale DeGroff, and spread from there thanks to the likes of Audrey Saunders (Pegu Club) and Sasha Petraske (Milk & Honey) in New York during the early 2000s.

The stories of two bartenders immersed in this growing cocktail culture are also chronicled. Steve Schneider, a young ex-Marine, dreams of moving up the ranks at award-winning New York bar Employees Only, while Steve “Carpi” Carpentieri, a bar owner, struggles with trying to save his 25-year-old Connecticut bar.

If you’re looking for L.A.’s appearance in the film, however, you might be a bit disappointed. Think: uncredited, “There’s my elbow!” cameo. To be fair, the focus of the documentary is really on the beginnings of the cocktail revival which germinated in NYC. Maybe our city will be featured in Hey Bartender II.

If you want, you can turn a screening of the movie at home into a “Spot L.A.” drinking game: Take a shot whenever your favorite Angeleno bartenders Eric Alperin (The Varnish), Jason Bran (Roger Room), Matthew Biancaniello (Cliff’s Edge), and Aidan Demarest (Invention) pop up on the screen.

Initial reviews of the film have been mixed. “This isn’t the cocktail doc enthusiasts are waiting for,” wrote The Hollywood Reporter. But when I polled L.A. bartenders at a raucous Hey Bartender after party atop the Andaz West Hollywood this past Tuesday, they lavished praise on this insider’s look at their industry.

Brent Falco (bar manager, Cole’s): “It made me appreciate my industry. It also made me tear up watching it. And it made me realize that the mentorship is the most important thing we have to do with our industry because that’s what’s going to give back to the world and to America and bring back what we lost in Prohibition.”

Christine England (former bartender, The Pikey; brand ambassador, Belvedere Vodka): “The movie was amazing. It really was a love story to our profession, to our community. It really, for me at least, solidified wanting to do more and be more and grow bigger and do bigger for our community, for our customers, for anybody who’s in love with the cocktail.”

Jordan Gold (bartender, Ray’s & Stark Bar): “I thought it was inspiring. It was a really good view into our world, both for people who don’t know about us and the community and cocktails, and for us, looking from the inside in. In the movie they said it’s not about the bartender being the star, it’s about the customer being the star and the bartender is the supporting role. And it’s nice to be reminded of why we’re here and why we fell in love with this in the first place.”

Matthew Schaefer (bar manager, Chateau Marmont): “The opportunity to see Dushan [Zaric of Employees Only] in his element made the documentary for me. I think it is a great cross-section of our industry, but still only a small piece of the pie. It was a great representation of the history and innovation in the NY community, but selfishly I was hoping to see more from Portland, SF, L.A., and even SD. We need our California Dale DeGroff to please stand up! I also loved the story arc of Carpi. I think he really stole the show.”

Naomi Schimek (beverage director, Spare Room): “I went in with low expectations and I came out just loving it. It was very heart-warming. There were some voices that were left out that I would have liked to see in there. New York and otherwise, all over the country. But on the whole I thought it was very well done. If I ever tried to explain what we’re doing to my parents, to the masses, to people on the street, all I ever have to do now is say, ‘I can’t explain it, go see that movie.’ And then they’ll understand it.”

Nicholas Vitulli (boozeier, The Famous): “I found it thought-provoking, informative, inspiring and it invoked a feeling of appreciation. I wish L.A. was represented a little bit more obviously. I liked that they followed people’s personal stories through fruition and that it was as informative to the layman as it was. Without going too far into it, I’d like to say it’s about time, and I’m glad I’m part of it.”