Home Uncategorized What L.A. Bartenders Are Drinking for Thanksgiving 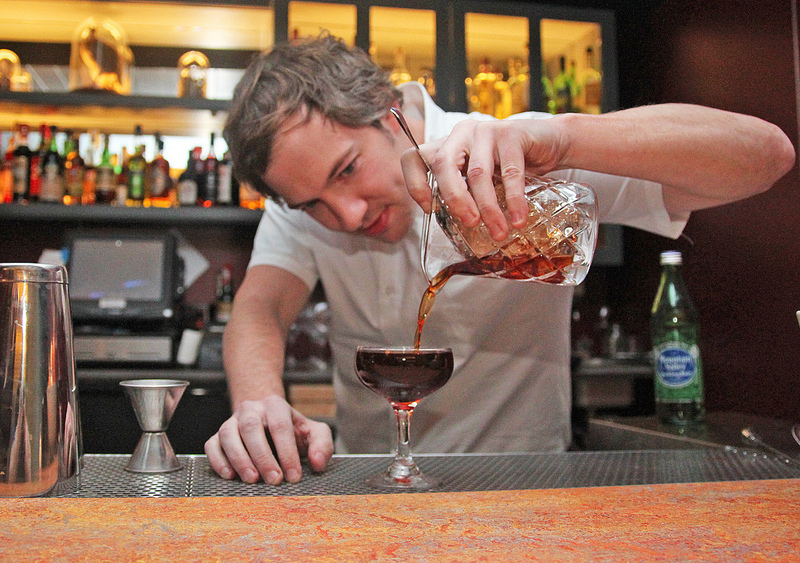 For Thanksgiving, you probably already have your entire holiday menu all planned out; all the fixings, desserts and the cooking method for your turkey. But what will you serve your guests to drink? If you’re looking for something other than the usual bottles of wine, something that will go well with your perfect meal who better to ask than expert drinkers? So I asked 10 of L.A.’s top bartenders what they are drinking during and post-turkey. Answers varied from a simple beer to Cynar intravenously.

Alex Davis, The Library Alehouse: I always make sure I have few bottles of Dupont Avec Les Bons Voeux on hand for Thanksgiving. It’s one of my favorite beers of all time, and it’s a robust Saison, so it pairs beautifully with nearly everything on the table. My girlfriend makes an insane blueberry pie, that I like to pair with Rodenbach Grand Cru at dessert. Sweet blueberry, buttery crust and sour cherry notes are a match made in heaven. After all that, I’ll probably have a shot of Fernet to settle the stomach and a glass from the bottle of Stranahan’s Whiskey I’ve been waiting to open since I got home from GABF. After that, it’s likely I’ll inadvertently fall asleep on the couch.

Brian Summers, Bar Ama: The last three years I have made a punch for my family.12-year Glenfiddich, Calvados, fresh pressed apple juice, fresh squeezed lemon, a syrup spiced with cinnamon, allspice, nutmeg and clove, and then topped off with champagne. After the meal when that Tryptophan kicks in, I don’t feel like fussing with anything elaborate, so I enjoy a beautiful dram of single malt on it’s own. Last couple years it’s been Single Barrel Balvenie 15 Year.

Brynn Smith, Sotto: Two things…would love to have a Brandy Flip. We have the “Ciao Bella” at Sotto so yummy! Egg Yolk, cream, Lazzaroni Amaretto, Galliano Ristretto and Vecchia Romana Brandy. Very festive, decadent, and not too sweet just sweet enough. The other Thanksgiving essential is an amaro. Maybe some Braulio, an Alpine Amaro that has a beautiful peppermint note that will help with digestion after you pig out!

Dino Balocchi, Littlefork: I love making my hot buttered apple cider every Thanksgiving so I’d probably end up starting off my day with that. I usually make it the night before, pull out the spices, before I go to bed, wake up the next day, heat it up, and do some test runs before letting the fam and friends get at it. Post turkey is the “American Vecchio”–cold press coffee to avoid the post turkey nap, amaro to help with digestion, and whiskey to keep the party going.

Gabriella Mylnarcyzk, ink: I’m cooking this year so my plan is to have an apple calvados punch ready that we can keep dipping into whilst getting ready , it’ll be good mixed with beer as a “Snakebite” for during dinner, too. Post Thanksgiving I’ll have an intravenous of Cynar set up.

Giovanni Martinez, Sadie: During prep I am more of a beer guy, a nice stout like Velvet Merlin, mmmm. I also always put out a punch bowl right before dinner. An aged rum and brandy punch. After dinner a nice glass of Chivas 18 on the rocks.

Jason Bran, Warwick: Wild Turkey! C’mon! A bottle of the 101 proof rye has been my tradition for years. I’m happy that it’s back! Post turkey…Cardenal Mendoza Spanish brandy neat!

Josh Goldman, Acabar: I’m pretty traditional on Thanksgiving. Beers and brown spirits during football, Riesling and Pinot Noir (I am a sommelier after all) during the meal and of course lots of Fernet and sodas after to aid digestion. Not a very big cocktail day for me since were all cooking and sipping throughout the day.

Karen Grill, Bestia: Anything with sherry for me. It helps me balance out all the heavy food and goes perfectly with cranberries or sweet potatoes. I like a Bamboo or a Sherry Cobbler with and after dinner.

Matthew Biancaniello, Feed Body + Soul and Plan Check: This year I will have a 2000 vintage triple cream sherry for after Thanksgiving and pre-Thanksgiving a 30-year-old Laphroaig neat 4 ounces and a stinging nettle gin and tonic with Q and fresh lime.