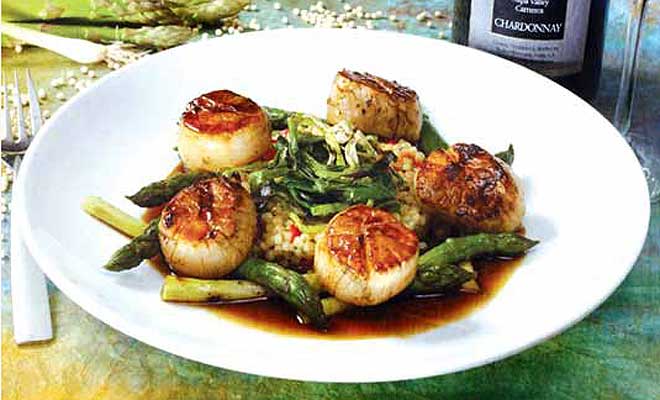 After eating out a few times a week for the last five years, I’ve become what some might consider an ordering expert. But there’s a method to my menu picks—even if sometimes it’s just to see if something that sounds awful manages to be edible. Here, I’ll pick apart the menu at a new restaurant (which I have not yet been to) and—assuming I’m ordering for a hungry party of two—I’ll show you how to eat like I do.

This week it’s Seasons 52, which opened yesterday at the Westfield Century City. The national chain with locations already in San Diego and many more on the radar, boasts its “seasonally inspired cooking with every item less than 475 calories.” Keeping the health-focus in mind, here’s what I’d be eating. (Full menu below.)

Flatbread: Spicy chipotle shrimp flatbread with grilled pineapple, feta cheese, roasted poblano peppers. Why: Since they’re listed first, flatbreads seem to be a major focus of the restaurant. This dish manages to sound both gross—feta and pineapple and shrimp, ick—and possibly yummy, as I love spicy things and pineapple on pizza (yes, I’m one of those). It’s worth the risk. Besides, there’s always some benefit to trying something that sounds like it could be terrible. It tells me one of two things about a chef. 1) If it sounds gross but manages to be great, this tells me that the chef has some serious talent. Way to go. At the same time, it might introduce me to new flavor combination possibilities for the future. 2) If it sounds gross and is gross, this tells me that the chef is struggling on many levels. He or she should know better. I sure did. With this dish, too, I’m really just trying to gauge crust and the toppings to base ratio. Trying one, no matter the toppings, will let me know if the flatbreads are worth anything.

Appetizer: All-natural beef chili with black beans and cilantro sour cream. Why: Because it sounds great! A nice hearty start to what could end up being a pretty light meal. Plus, chili tells you a lot about a chef’s understanding of flavor balance.

Seafood: Grilled boneless rainbow trout with roasted rainbow carrots, parsley new potatoes, broiled lemon. Why: Again, the other fish dishes sound way overcomplicated (roasted artichoke-stuffed shrimp with pasta pearls—huh?). This, on the other hand, sounds simple and lovely. All of the elements make sense together. I also adore trout, and seeing how a chef grills a simple piece of fish tells me a lot about his or her technique.

Poultry & Meat: Wood-roasted pork tenderloin with soft herb polenta, cremini mushrooms, broccoli, and shallot-dijon glaze. Why: I’ll be honest, the Piedmontese bone-in strip steak sounds like what off-duty me would order, too, but for work purposes I find that pork is a much trickier meat to prepare well. So often it’s tough, dry, and overcooked. If the chef can cook the lean tenderloin properly, that tells me they know how to work a meat station. Also, creamy polenta sounds indulgent after such a lean meal, and I’m craving something luscious. Combine that with cremini mushrooms and the whole thing has the potential of being a highlight—especially at under 475 calories!

Dessert: Meyer lemon pound cake and raspberry chocolate chip cannoli. Why: First off, always order dessert. No matter what has happened in the meal thusfar, there is usually a hardworking pastry chef back there doing their own thing and they deserve a shot. These desserts are billed as “mini indulgences,” and therefore I’ll order two. Anything meyer lemon is sure to be a favorite. The raspberry chocolate chip cannoli sounds bizarre, but intriguing. And cannolis are also tricky little devils to pull off without creating gum-filled soggy tubes. I could do without either the raspberry or the chocolate chips, frankly, but who knows? It might be just what I need to cap off the meal.

What I’d Drink: Aveleda Vinho Verde,  Portugal  ’10/’11. Why: With a meal this light and all over the place, a refreshing and equally light Vinho Verde will fit the bill. Plus, it’s only $7.50 a glass and I might have a couple. Ok, I’ll have a few. Cheers!