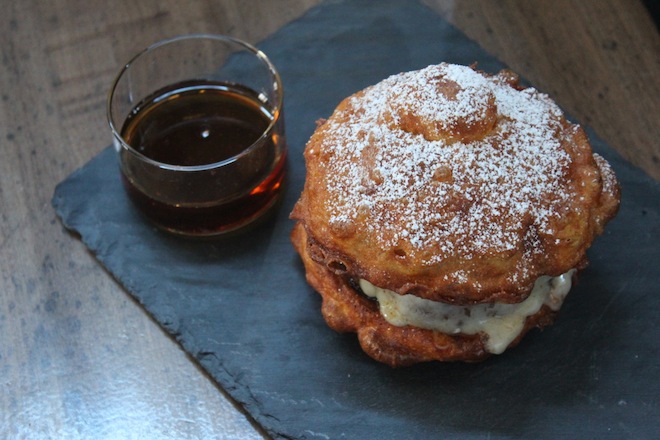 It’s a sandwich! It’s a burger! It’s Michael Voltaggio’s Monte Cristo Burger, which will be available at all Umami locations nationwide beginning on January 28. The collaboration is part of Umami Restaurant Group’s series of burgers created by artists that love Umami Burger. Voltaggio, the chef and owner of ink. in West Hollywood, created a rendition that starts with Umami’s signature beef patty as a base, and then adds Gruyere fondue and prosciutto to a custard-soaked and fried Umami Burger bun. The sandwich is sprinkled with powdered sugar and served with maple syrup on the side.

Said chef Voltaggio in a release, “I wanted to make a burger that would hit the spot no matter if you’re craving something sweet or savory.”

The Monte Cristo, excluding sides, is $15. A percentage of the sale of each burger ($1) will be donated to the Los Angeles Mission. The Monte Cristo Burger will be available for a limited time beginning on Tuesday, January 28 at Umami Burger locations nationwide.

Shake Shack is Opening in DTLA with Some Exclusive New Items