Home Uncategorized What Foods Would Lure Us into A Bear Trap 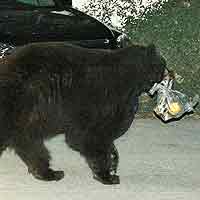 Yesterday the California Department of Fish and Game caught “Meatball” Glen Bearian–the bold black bear who was frequenting homes in Glendale and La Cañada neighborhoods—for what they hope is the final time. He’s now on his way to a Colorado wildlife sanctuary where 90 other wayward bears already reside. So, how’d they catch him?

From the Glendale News-Press: “The game warden laid out a trail of McDonald’s Happy Meal and French fries to lure the Glendale bear to a trap on a residential street just outside the Angeles National Forest. Inside the trap, bacon and honey were waiting. ‘He was eating away and he closed the trap,’ said Andrew Hughan, spokesman for the California Department of Fish & Game. ‘It was a pretty clandestine operation.’”

Wow—McDonalds, bacon, and honey? At a certain hour on a few Saturday nights past, we, too might have found ourselves on our way to Colorado. But then again, we’re partial to Del Taco.

We decided to ask some members of Los Angeles magazine’s editorial staff to share what three foods would have them willingly entering a cage in the woods. (Hint: If anyone out there is looking for a good copy editor, just put out some Zankou chicken.)

“The beef bourguignon from Comme Ça, the “Death in the Afternoon” absinthe/champagne cocktail from Roger Room, the Salted Caramel Macaron ice cream sandwich from Milk.”

“Kokomo’s thick-cut bacon (no need for the lettuce or tomato), an apple fritter from Bob’s Donuts in the Farmer’s Market, an omakase sampler from Urasawa (mind you, I’ve never eaten there because I can’t afford it, but yeah, it would still make me brave a bear trap).”

“I agree with the bear! McDonald’s Happy Meal, bacon, honey.”