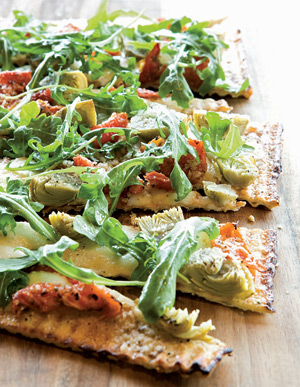 Though gastronomic places tend to get most of the coverage, big, midrange restaurants are where we actually eat. Their quality may vary, but these bustling dining rooms depend on the quiet professionalism of their cooks. These are workers who start each service with massive amounts of prepped food and end the night with their stations stripped bare, their heads still buzzing with orders. They have to churn out the goods. When despite the demands, the dishes are executed carefully and that key step an entrée might depend on is not ignored to save time, there are no cooks I admire more.

Midrange is a style of dining that is often accused of being formulaic. Of course it is formulaic. You can’t feed 700 people at dinner by winging it. I don’t think it’s the culinary formula but rather the uniformity that bothers us. Getting yet another company’s rendition of sliders, rotisserie chicken, and hearty apple pie is one thing. Feeling that you are being processed, that between the scripted waiter and the “How did we do?” questionnaire the arc of the meal has been masterminded at some distant HQ?, is something else entirely. That’s when so many of these businesses start to seem the same.

Westside Tavern, which opened in March at the Westside Pavilion, is all about volume. With its 300-seat dining room, vibrating coasters that summon guests when their table is ready, and the blinding smiles of the three hostesses officiating at the entrance, this is an establishment that makes no bones about embracing the masses. It’s backed by Tristan Simon, a well-regarded Dallas restaurateur with a stable of midrange properties that are heavy on theme. (The Porch specializes in “down-home food & uptown cocktails”; Hibiscus is a “Pacific-influenced chophouse.”) With Westside Tavern’s craft beers and a menu that tosses around farm names, one might suspect that California itself is a theme here. What keeps the restaurant from veering into parody is Simon’s partner in the venture, chef Warren Schwartz.

Initiated into the rituals of great produce while studying under Bradley Ogden at Northern California’s Lark Creek Inn and mentored in the principles of lustrous sauces by Joachim Splichal at Patina, the 39-year-old has overseen the kitchen at Saddle Peak Lodge and was most recently executive chef at Whist in Santa Monica. From the evocative purity of a downy peach to the requirements of poolside-cabana diners, Schwartz is conversant in the many dialects of California cooking. But can he push the most ubiquitous of all, midrange dining, beyond formula to deliver more?

As malls go, the Westside Pavilion is an inauspicious one. I don’t believe it ever had the Beverly Center’s golden period. The building is narrow and ungainly, with an annex across Westwood Boulevard that, despite being anchored by a Barnes & Noble, had lacked a reason for being. Then Landmark Theatres installed its answer to the ArcLight, giving a certain sleekness to the venue. The addition of Westside Tavern on the ground floor has helped nudge what was once a rudderless structure into an arty meeting place.

At dinner there’s always a wait (the restaurant doesn’t take reservations). One night I found myself stalled near the entrance, vibrating coaster at the ready, beside an older couple holding hands while three young mothers—freed from the kids for an evening—checked in at home and a group of men cracked each other up with comments about the movie they’d just seen. It was a mall moment, one of those communal snapshots that can capture L.A.

The nightly clamor in the dining room does, too. A convergence of poured concrete, exposed I beams, and honey-colored wood, the space has a contemporary directness that is mirrored in the service. Tablecloths aren’t used, bread isn’t offered, cutlery is rolled inside napkins and slapped on tables after a quick wipe down. Being a tavern entitles the restaurant to focus on practicality, but service is at times flighty and even brusque. It takes forever to get served at the bar. Orders are frequently brought to the wrong customer, and there’s occasional tension between waiters and busboys over whose job it is to clear.

All of which heightens the need for the kitchen to get the food right. The breadth of Schwartz’s training, the particular note of wholesome simplicity at which California excels, is apparent in the authoritative way he’s written his menu. It lists more producers than a Hollywood epic: The lamb is from James Ranch, the bacon from Nueske’s, the spinach from Bloomsdale Farm. Together with a smattering of strategic descriptions such as “ale battered” and “sea salted,” the single-page document, printed on heavy bond paper, is very much a modern tavern’s bill of fare.

Of course, Gulfstream, which is part of the same company that owns the Houston’s chain, has been channeling the market-driven, farmer-as-hero ethos in Century City’s Westfield Shopping Center since 2003. The difference is that Gulfstream, as good as it is, doesn’t have Schwartz, who steers clear of doing what other midrange restaurants do: confuse quantity with quality. Heartiness is what midrange dining is about. Even if you haven’t eaten well, there’s never any doubt that you’ve eaten.

The servings at Westside Tavern can be substantial without being excessive. The tender short rib pot roast on a bed of whipped potatoes is a case in point. The jar of chicken liver mousse is more than one person can eat; for two or three friends, however, the airy yet intense preparation spread on warm sourdough is a delight. The grilled cheese sandwich combines the unpretentiousness of the cafeteria version with the exactitude of the obsessive chef. The bread, which looks like plain sliced loaf, has the lightness of a good challah; the cheeses are two cheddars spiked with Port Salut. That curious step in which the bread must crisp at the same rate the cheese melts has been expertly achieved, down to the slightly burned lick that hews to the crust. The cup of tomato-basil soup is a pert accompaniment. The halibut, steaming hot, forms a fundamental bond with the dish’s malt vinegar-splashed potato chips.

Schwartz has a real affinity for vegetables. Fried, freshly harvested Blue Lake green beans might sound like the unfortunate love child of a barroom technique and a pristine ideal, but when they arrive in a cocoon of tempura with a sprightly lemon aioli dipping sauce, they make complete sense. The fried zucchini blossoms are bursting with ricotta. When he pairs grilled radicchio and grilled peaches in a “market special,” the combination of Italianate bitterness and summer sweetness is something close to flawless. The heirloom tomatoes with an aged balsamic brighten the grilled Angus skirt steak with Saint Agur blue cheese.

There’s a level of nuance here, a vision maintained amid the onslaught of numbers (the restaurant is open for lunch and dinner seven days a week), that is impressive. Still, if Westside Tavern is to surpass the standards set by similar restaurants, it will need to nail the must-have dishes. The rotisserie chicken, its soggy skin buried under a gloppy mustard sauce, seems to have come from a kitchen too swamped to focus on such details as crispness. When prepared well—the meat juicy, the skin recalling the open flame—the dish embodies the affordably priced quality that midrange dining is supposed to provide. Granted, serving good roasted chicken in a restaurant is hard—it’s not an individual portion that can be readily made to order such as steak—but it shouldn’t trip up an experienced chef like Schwartz.

Another hitch is that the restaurant’s use of produce can seem random, inviting the suspicion that some ingredients are employed for what they say rather than for what they do. The jumble of heirloom tomatoes might contribute to the grilled Angus steak. But the tomatoes appear again with corn kernels under the grilled salmon, again with corn as a side, and yet again as an accompaniment to the burrata. Wild arugula (a description I’m dubious of, since I doubt it is being harvested in the meadows it conjures) brings a lovely sharp flavor to the baby artichoke and smoked mozzarella flatbread. Tucked in the hamburger bun and wilted by the trapped heat, it might as well be shredded iceberg.

Except for the fine lemon meringue, with its soft browned peaks, and the strawberry shortcake, desserts are essentially something sweet and warm with something sweet and cold plopped on top. Sticky toffee cake has mascarpone ice cream. The apple pie is enough for four—a detail the waitstaff might mention. Despite the menu’s emphasis on seasonality, not a single stone fruit dessert was offered at the height of summer—a fact that makes the restaurant’s claims appear to be little more than a marketing ploy.

Whether there’s a stone fruit dessert is a small point, but my guard goes up with corporate establishments. I’d hate for Westside Tavern to become too pragmatic, making claims but balking at the cost, evoking bounty but not delivering it. The way I see it, the place is much more than another midrange restaurant; it is an advance of sorts. Having a chef on-site rather than in some faraway lab is what distinguishes the venture: Schwartz can offer individuality within the confines of a cranking kitchen. I find that exciting. Not every restaurant can be an idealistic boîte that forages locally and serves ten.