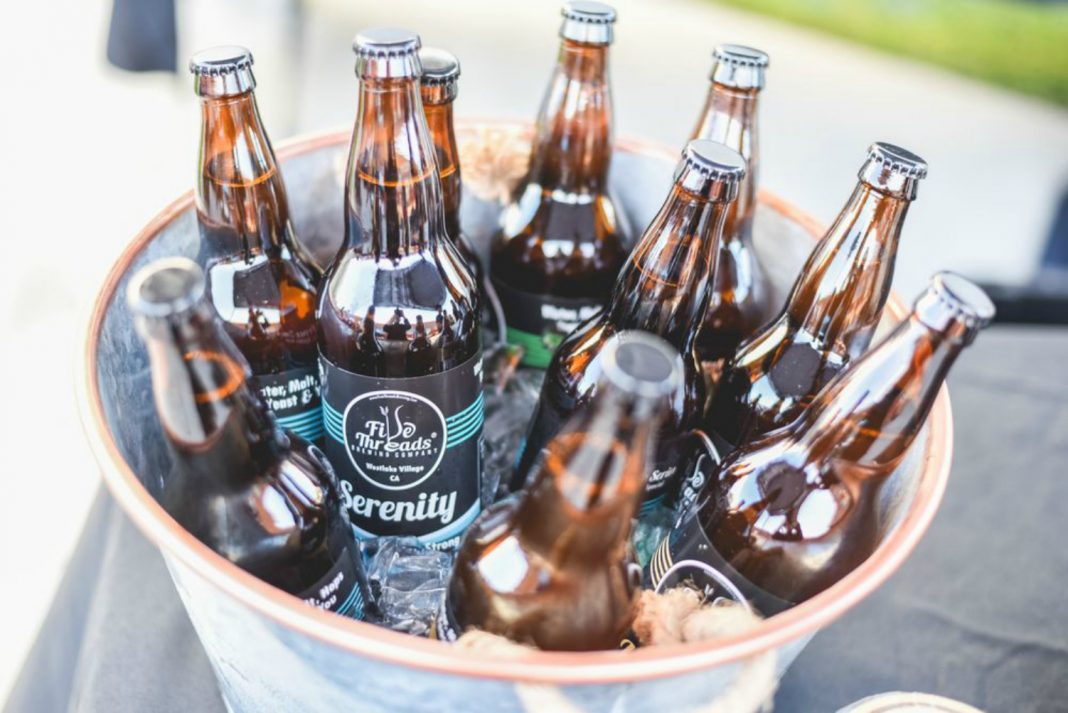 It’s unsurprising that something called the “Beermuda Triangle” would be enigmatic—a geographic conundrum. At first or second glance, there’s little sense in establishing a three-brewery beer oasis in an unassuming Westlake Village industrial park. Navigating the Beermuda Triangle is, in essence, a walk through a weird parking lot past storage units and pallet piles, loading bays and the lingering question of Google Maps’ reliability.

Besides, this is Westlake Village, securely within the wealthy, suburban, wine-drinking buffer zone on the Los Angeles-Ventura County Line. And yet, between the Beermuda Triangle and a walkable Figueroa Mountain location down the street, Westlake Village has itself a craft-beer bar scene to be reckoned with. The location defies logic, but the crawl makes for an unbeatable Saturday afternoon.

Five Threads Brewing, the first corner of the Beermuda Triangle, opened in 2015. Tim Kazules, the owner and head brewer, had ambitions of opening a brewery after a transformative, albeit unexpected, experience at Great Divide Brewing Company in Colorado during a work conference in 2009.

“I was really enamored with the culture,” Kazules says. “Everyone seemed happy and I wanted to be happy, too.”

Though he says he vastly underestimated the work that goes into that happiness, Kazules says he’s living out his aspiration: making beer and talking to people about it. Five Threads’ atmosphere caters well to the latter; it feels like a hip coffee house or wine-tasting room where the distance from producer to consumer is minimal. Here, Kazules can mingle with patrons and make direct appeals to the craft-brew dubious.

Though Kazules lived in the area before setting up shop, an incentive to stick around Westlake Village was how he was able to get his dream approved. According to Scott Wolfe, Westlake Village’s deputy city manager (and homebrew enthusiast), that’s due to the city’s size.

“We [the city] tend to operate a little more quickly than most cities in the area here due to our small size and our small staff,” Wolfe says. “We just don’t have the time or desire to put up a lot of bureaucratic roadblocks and hoops to jump through.”

That means a potential brewery could get approval to build and serve within three months, rather than up to a year, which would be more typical, according to Wolfe. It wasn’t long before Kazules had some neighbors.

Soon, Buellton-based Figueroa Mountain Brewing Co. opened a location within walking distance, and two more breweries opened in the same industrial park as Five Threads: Westlake Brewing Company and 14 Cannons. That said, each has something different to offer.

Westlake Brewing Company occupies a massive warehouse space that doubles as a venue. It’s not unusual to catch former members of big acts from the 1970s and 1980s, such as Quiet Riot, occupying the stage.

Fourteen Cannons is the newest addition to the Westlake Village scene—and also the shiniest. The nearly year-old space houses top-of-the-line brewing equipment and doubles as a showroom for the brewery’s owner. The Marshall Group, a construction company, specializes in the business of building breweries for beer aficionados with the desire—and the capital—to create a space all their own.

The Beermuda Triangle was firmly in place. And here’s what makes it special: despite the brewery saturation, nobody from the any of the breweries seems particularly concerned about business being spread too thin.

Kazules of Five Threads says that after a brief knock in business that marks the opening of another brewery, he’s actually seen consumption increase.

“Each time they opened we took an initial hit for like a week,” he says. “But then we also were discovered by more people.”

Beyond the increased visibility that new openings bring, the head brewers have all described a relationship of extended courtesies.

Josh McCombs, Westlake Brewing Company’s head brewer, says the brewers are “eternally borrowing cups of sugar from each other.” Kazules doesn’t have a forklift, but McCombs does. Figueroa Mountain ran out of oxygen, and 14 Cannons was willing to share.

All four breweries have plans for expansion, which include pushing their beers into your grocery stores. As they grow, they may begin to bump into mutually claimed territory and colder attitudes, but for now they exist in a state of camaraderie with a mutual goal: sharing the good word of worthy beer.

“You’re the brewer, you’re my friend,” Figueroa Mountain brewer Ryan Hensley says plainly. “We gotta hang out. We’re in it together. Every brewery that comes in just gets more people interested.”

RELATED: 10 New L.A. Breweries That Should Be on Your Beer Week Radar

The Best Place For Craft Beer In L.A. is a Gas Station in Pasadena