Home Drinking In Recent Weeks, WeHo’s Bar Scene Was Both a Glimpse at the... 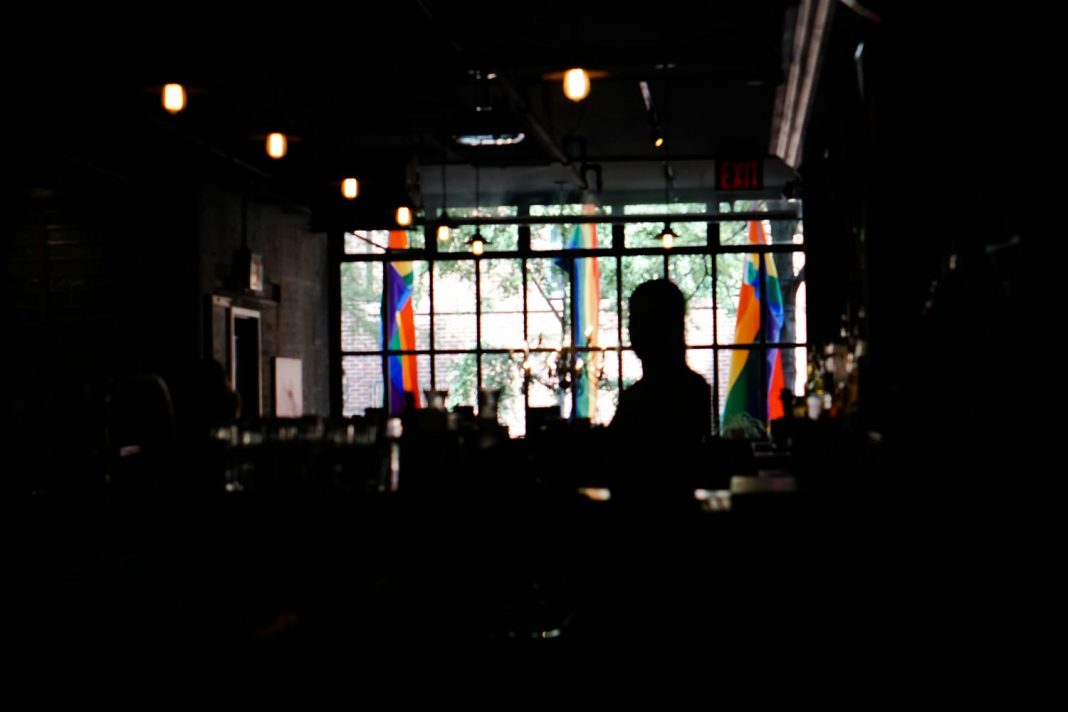 It’s midnight on the hill behind Cedars Sinai and the scene is surreal. A solitary black Escalade idles outside Catch L.A. while the Vanderpump empire sits in the dark, plywood affixed to its windows. But not all is quiet: a largely unmasked line is forming at Rocco’s bar (owned by former N*Sync member Lance Bass), snaking around its newly fenced-in sidewalk patio. Outside Motherlode, the oldest queer bar in WeHo, a group of friends is freak dancing with each other on the sidewalk. And at the famed Abbey, a huge crowd is awaiting a temperature check for entry, including a man wearing a mask bedazzled with sequins.

Welcome to midpandemic Boystown in West Hollywood. Before Governor Newsom ordered bars, breweries, and brewpubs to close on Sunday, citing a rapid rise in coronavirus cases, the raucous stretch of Santa Monica between La Cienega and Robertson served as a kind of test run for nightlife in the COVID era, cautiously opening up to well-lubricated customers—albeit in a way that made contracting the virus more difficult and talking to strangers (or getting laid) near impossible.

Bars and nightclubs hoping to function in this new era were asked to make a series of radical changes. In addition to operating at 50 percent capacity, guidelines issued by L.A. County on June 18 dictated that lounges and nightclubs across L.A. were only allowed to reopen as bars: no dancing or live entertainment permitted. For West Hollywood, that meant no more drag shows or slipping five dollar bills into a dancer’s gold lamé booty shorts. Customers had to be seated while ordering and drinking, and had to wear masks while walking to the bathroom.

Many bars and nightclubs don’t seem eager to take on the new requirements. In addition to SUR and Pump, RAGE, Revolver, and Micky’s remained shuttered, although a note on Micky’s website says that the nightclub was “entertaining the concept” of reopening as a restaurant.

“A lot of the guys come up to the curb and say, ‘Hey, can I get some Gun Oil?,’” says owner Larry Block, referring to a popular line of lubes. “That one was approved for medical use so we were able to sell it throughout the pandemic, but we’ve mostly become a mask emporium. We sell Black Lives Matter masks, rainbow masks, sparkly masks, rhinestone masks, a Dr. Fauci mask, the list goes on.”

But reopening bars is trickier. Even before Sunday’s state-ordered shutdown was issued, West Hollywood officials said multiple warnings and one citation had been issued to a restaurant for failing to enforce social distancing.

Gregory Tal Sanchez, who visited a WeHo bar last weekend, said the crowd inside the small bar was “not really” socially distanced and few were wearing masks. “Everybody is nervous,” he said. “But only two percent die and that’s usually folks with major health issues.”

Other bars seemed to be taking a more proactive approach to safety. Alfonso Enrique Vega, who’d visited the Abbey over the weekend, says he was stopped by security while walking to the bathroom and was asked to retrieve his mask. “That encounter made me happy,” he said.

An entire ecosystem of performers, promoters, and bartenders was thrown into flux when L.A. went into quarantine, and many don’t see their jobs returning anytime soon. “My job, like many others, will likely be the last to come back,” says Mario Diaz, known for promoting L.A.’s raunchiest, longest-running queer party.

He says many of the go-go dancers he once worked with are also struggling. “Some are even hooking up with strangers on OnlyFans, putting their lives at risk to create content,” he says. “It worries me a lot.”

Fubar owner Jay Krymis, known for hosting big, sexually charged events in his diminutive bar, says he’s toying with new ideas to keep his staff and customers safe in the future. “I’ve thought that maybe the dancers could go behind a plexiglass shield,” he says. “We could have a little slit where people put their dollars, or even use Venmo or QR codes for tipping.”

But he isn’t hopeful that he’ll be reopening anytime soon. “My job is the antithesis of social distancing,” he adds. “Frankly, I’m just praying for a vaccine.”

RELATED: Bottle Servers Popped Out of Caskets at One L.A. Club’s Reopening Brunch