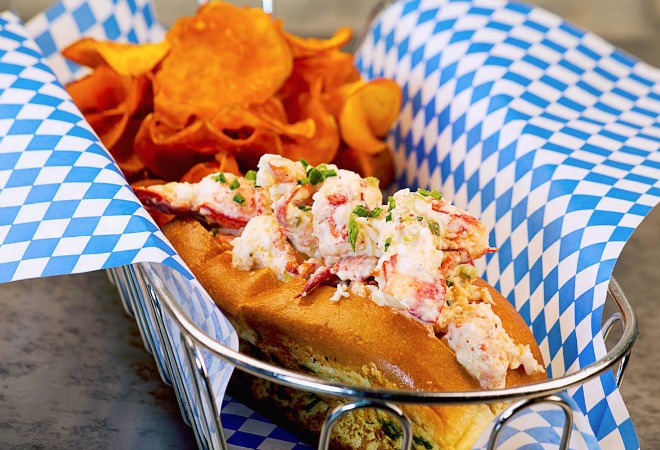 1. Alimento
It doesn’t get much more anticipated than this: Sotto chef Zach Pollack is putting his own spin on rustic Northern Italian cuisine at this long-awaited Silver Lake restaurant. If thick-cut mortadella sandwiches, mackerel conserva and biodynamic Nebbiolo sound like your jam, then this is your kind of place.

3. BP Oysterette
The second location of this Santa Monica-based seafood shack opens on West Third Street on Sunday, looking as cozy and laid-back as its beachside sibling. Dive in for fresh oysters, fried clams, and other classic seafood plates.

6. Fifty Seven
New resident chef Josh Drew’s summer menu has debuted has been well-received thus far. You can ball out and order the 100 day-aged ribeye for two, or try abalone crudo with pink lemon and pineapple sage. David Kaplan and Proprietors LLC are behind the new cocktail program as well.

7. Marvin
Restaurateur Bruce Marder and his son Max are behind this Parisian-inspired bistro on Beverly near The Grove, along with some help from Escuela’s Steven Arroyo. The focus is on wines by the glass and bistro faves like steak frites, cassoulet, mussels, and une cheeseburger.

8. Malibu Pier Restaurant
Has Malibu’s oft-underwhelming dining scene taken a step in the right direction? Former Patina Group chef Jason Fullilove seems to be the best hope so far, serving his style of farm-to-table cuisine at the Malibu’s Pier iconic restaurant space. Expect lots of seafood, including an elevated take on the classic fisherman’s stew.

9. ChocoChicken
Chocolate-flavored fried chicken has hit L.A. like a hurricane, and it tastes way less weird than it sounds. The slaw-topped fried chicken sandwich has proved an early hit with Downtown lunchers. And people called Adam Fleischman crazy…

10. Zuma Kitchen
Westwood’s beloved Turkish restaurant New Anatolia has been redesigned as the more stylish Zuma Ktichen, where you can still find grilled kebabs, wraps, and flavorful rice dishes. Look out for the special Turkish breakfast served on weekends too.