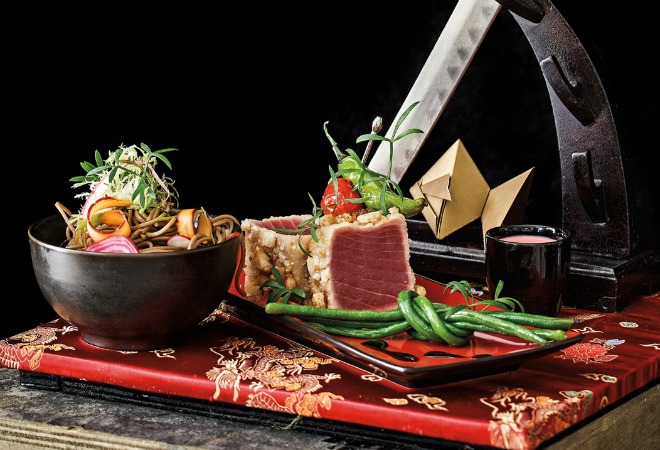 1. Saint Martha
Early word on this subtle strip-mall enclosed wine bar in Koreatown has been mostly positive. On the ambitious menu from chef Nick Erven look for small plates like spot prawn tartare, sea urchin tataki with avocado and seaweed Doritos, and pecan-smoked brisket with hoisin.

2. POT
Roy Choi was written up in two high-profile national publications this week (including the New York Times), so it’s no surprise that the already insane hype around the dining options at Koreatown’s Line Hotel have continued to swell (his upstairs restaurant, Commissary, is a few weeks away). Get down with BBQ spot prawns and spicy dukkboki.

4. Barton G
Let’s. Get. Weird. This wacky, extravagant West Hollywood restaurant from Miami restaurateur Barton G. Weiss is finally open after a long delay. With “whimsical” dishes like lobster pop-tarts and “bucket o’ bones” BBQ ribs, it will be interesting to see if the restaurant’s theatrical stylings can strike a charming chord with Angeleno diners.

6. Fifty Seven
New resident chef Josh Drew’s summer menu has debuted and early reports are quite positive. You can ball out and order the 100 day-aged ribeye for two, or try abalone crudo with pink lemon and pineapple sage. David Kaplan and Proprietors LLC are behind the new cocktail program as well.

7. Marvin
Restaurateur Bruce Marder and his son Max are behind this Parisian-inspired bistro on Beverly near The Grove, along with some help from Escuela’s Steven Arroyo. The focus is on wines by the glass and bistro faves like steak frites, cassoulet, mussels, and une cheeseburger.

8. Malibu Pier Restaurant
Has Malibu’s oft-underwhelming dining scene taken a step in the right direction? Former Patina Group chef Jason Fullilove seems to be the best hope so far, serving his style of farm-to-table cuisine at the Malibu’s Pier iconic restaurant space. Expect lots of seafood, including an elevated take on the classic fisherman’s stew.

9. Kitchen Mouse Café
This humble, vegan-centric Highland Park café has been some solid grassroots buzz for dishes like maple tempeh and avocado “BLT” and a buffalo bowl with yams and collard greens. Could this be the next Sqirl lying in wait?

10. Tipsy Cow
The owner behind Big Wang’s has gotten into the gastropub game with this Sherman Oaks locale serving craft beer and burgers topped with things like mac ‘n’ cheese and pork belly. Can you get your milkshake with booze in it? C’mon, you shouldn’t even have to ask by now.