Home Dining Wall of Fame: It’s the End for the Palm’s Celebrity Portraits 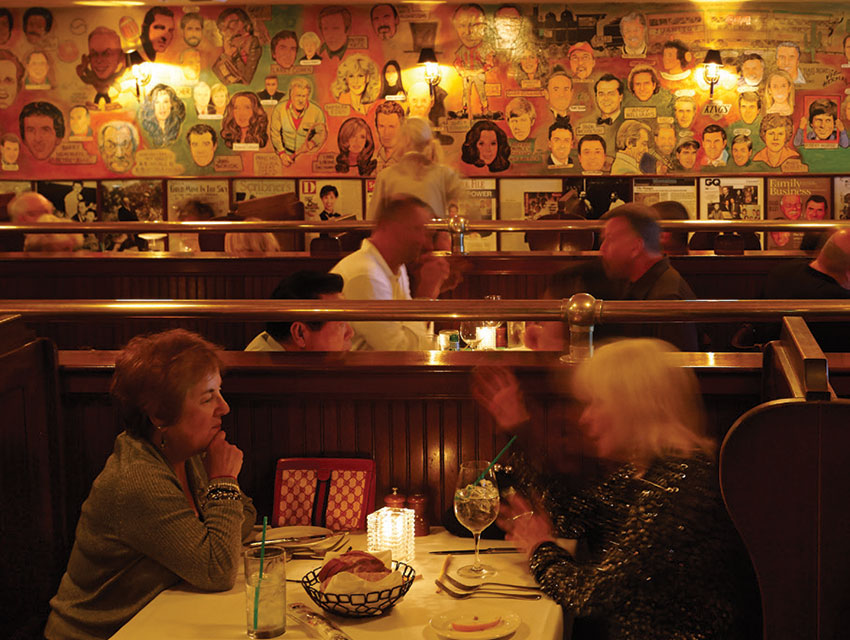 The Palm restaurant is known for its juicy steaks and celebrity clientele, but the vivid caricatures of the patrons leave the strongest impression. On September 30 the restaurant, which has been on Santa Monica Boulevard since 1974, will relocate to Beverly Hills. Although its boldfaced regulars may transition easily to the Canon Drive spot, their painted likenesses aren’t making the move. That includes the rendering of my father, singer Al Martino, whose face was one of the first to go up, in 1976. My dad (who passed away in 2009) and restaurant maître d’ Gigi Delmaestro were like brothers, so when the Palm offered me the opportunity to take my dad’s portrait (below), I launched a crusade to reunite some of Hollywood’s greatest faces with their real-life counterparts, from James Caan to Bob Newhart. In the coming weeks claimed pieces will be carved out of the plaster and available for retrieval on October 6. I won’t be able to get to all 2,600, but a handful of celebrities I’ve reached were happy to give their illustrations a new home. Here they share their memories.

James Caan
“I have been eating this prime meat since I was a baby. My dad was a butcher in New York, and one of his first customers was the original Palm, so this is great.”

Barbara Eden
“I still have the pink long-sleeved nightshirt they sold with the Palm logo! I’m not sure where I’ll put my picture, but I’ll be sure to let you know.”

Rona Barrett
“I would have dinner religiously with my late husband every Sunday night. It’s wonderful to receive this after all these years.”

Norm Crosby
“When they first put me up, I overlooked the cash register. They placed the second one above a booth—looking over my shoulder.”

Gary Owens
“It was such an honor to have my picture among the classic stars. It’s a wonderful piece of Hollywood history.”

Bob Newhart
“I always thought it was Tim Conway, so this is news to me!”

James Garner
“We spent so many wonderful evenings and milestones with my father at the Palm.” —Gigi Garner, daughter of the late James Garner

Carol Channing
“It was a very special time in my life. The only thing more damaging than the ravages of age would be that of a wrecking ball.”

Shecky Greene
“Every time people came into the Palm I used to go in and show them my picture. Finally one day Gigi, said to me, ‘When are you going to sit and pay for something?’ He had a great sense of humor. I hope my picture comes with steak and lobster!”

Jerry Weintraub
“How many lunches and dinners did I have at The Palm over the last 40 years? Too many to list—besides, I’ll forget someone and hurt their feelings. I miss Gigi and all the people who used to eat with me there.”

Al Martino
This is the portrait is of my dad, which he signed.