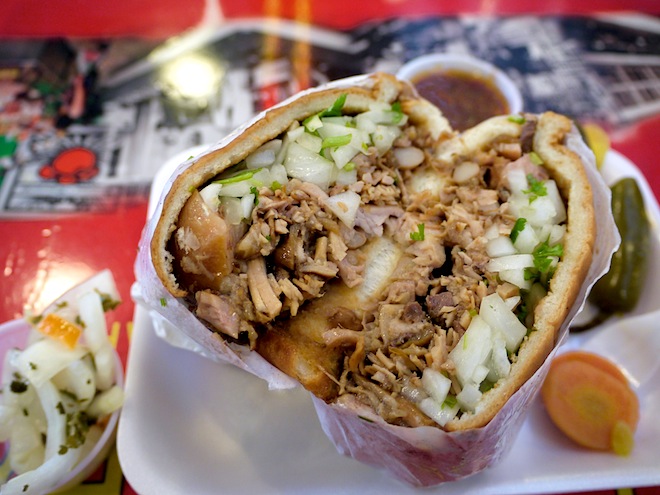 Just a month ago, the Grand Central Market revealed its new look and stall additions, including Sticky Rice, Horse Thief barbecue, and a fancy coffee stand right across from the Bulgarini Gelato cart.

While taking a quick peek at the upgrades and fresh flavors of the market, it was the 6-year old Las Morelianas, from the capitol city of Michoacan that caught my attention. The state of Michoacan is home to several local styles of pork parts, slowly cooked in lard, and the strongest tradition of Mexican-style pork confit in the world.

While the best carnitas in L.A. are not nearly as good as you’ll find in Michoacan, Mexico City, Toluca; San Francisco de los Romo, Aguascalientes; or Central Mexico, the folks at Las Morelianas prepare solid, tasty carnitas. They are cooked traditionally in a cazo, or large copper pot.

You can order the customary tacos, selecting your favorite cuts, or get it Mexican-American style in a burrito. I went for the torta. The golden, sweet pork is jammed into a roll with only diced white onion and cilantro to dress it up. A sandwich of carnita surtida, or mixed cuts, makes for a perfect Los Angeles summer afternoon in the heart of downtown Los Angeles.