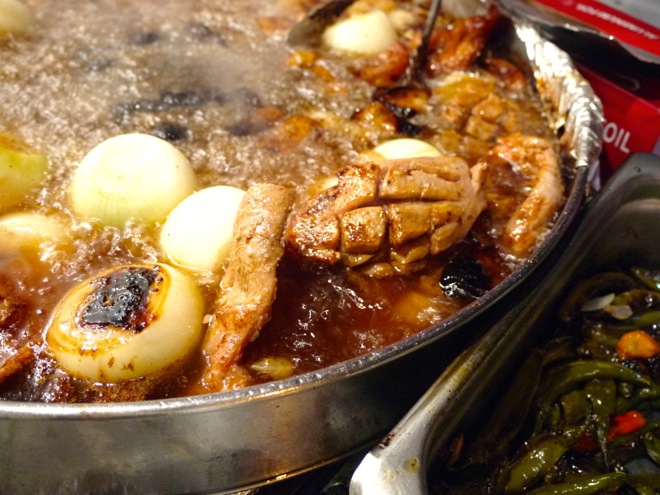 Los Angeles is experiencing a surge in the late night tacos de fritanga scene. You can spot these stands thanks to their telltale cooking device: the charola, a stainless steel disc with a raised convex dome in the middle. The charola is used to fry a motley lineup of meats—typically chorizo, longaniza, hog’s maw, chitterlings, and brisket (suadero in Spanish)—and is sometimes accompanied by a plastic-covered steam table that cooks other cuts like beef head, beef cheeks, brains, tongue, eyes, lips, and even pig ears.

Tacos de fritanga stands are seemingly everywhere in East L.A., K-town, and South Los Angeles, but Tacos La Güera—currently parked in one of our city’s taco hot zones, on the corner of Santa Fe Ave. and Center St. in Walnut Park—is one of my favorites.

There are many fine options at Tacos La Güera, but you’ve come for the best, real brisket in town. Many taco stands selling brisket are usually just using chopped, inexpensive skirt steak, but La Güera’s is legit brisket, fried in the charola until the connective tissue breaks down, the meat staying plenty moist, keeping lots of lush, beefy juices that will soak right into your tortilla. Like the rest of these vendors in L.A., the taqueros hail from the state of Jalisco where their Jedi skills include superb salsa technique (and I’m not talking about the dance). Try the pickled white onion with thinly sliced habanero and diced jalapeño, as well as their delectable avocado salsa.

Get out at mingle with the crowd, or pull up Mexican drive-in style and enjoy some tacos de suadero dining in the comforts of your own car, with the Jenni Rivera turned up to 11.