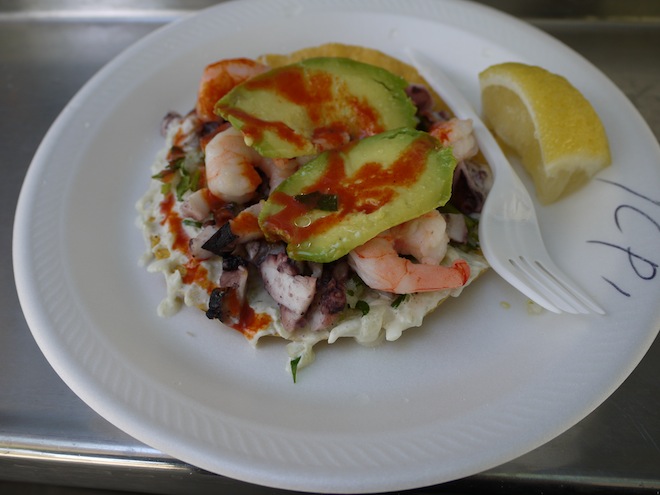 Every Angeleno, whether native or not, should take a picnic basket to the Hollywood Bowl once a year, drink martinis at Musso and Frank’s when feeling blue, and pass a sunny Southern California afternoon at Felipe Cejuda’s Mar Azul truck. And, by the way, the “Original Ricos y Unicos” on the side of the truck means rich and unique—there is no Rico at this old school, ocean blue lonchera parked on Figueroa Street, alongside Sycamore Park.

Maybe it’s because Cejudo is bit of a Rico Suave—just get him started and he’ll extoll his health, virility, and athleticism, and assure you that his many secret, homemade salsas, oils, creams, and dressings are what makes his tostadas and cocktails the best in town. As an 18-year veteran of the L.A. food truck wars, and a menu with flavor that exceeds his bravado, there’s no doubt Cejudo is a man of his word.

His shrimp and octopus tostada is given a light, creamy base from highly guarded recipes—it gets a little Spinal Tap when you ask about the condiments—“don’t even look at the salsas!” Chopped onion and cilantro help bring out many layers of flavor before cooled, tender octopus and shrimp are placed atop the tostada. Avocado provides a final touch of richness; a few splashes of Cejudo’s magic potions do the rest. It’s an unforgettable bite, and one that keeps the faithful lined up whenever the Mar Azul truck pulls up. Cejudo is just as loyal to his regulars as they are to him.

Cejudo is from Mexico City, and while he does have a chilango (person from Mexico City) seafood street style—his flavors are rich and unique—just like it says on the truck.