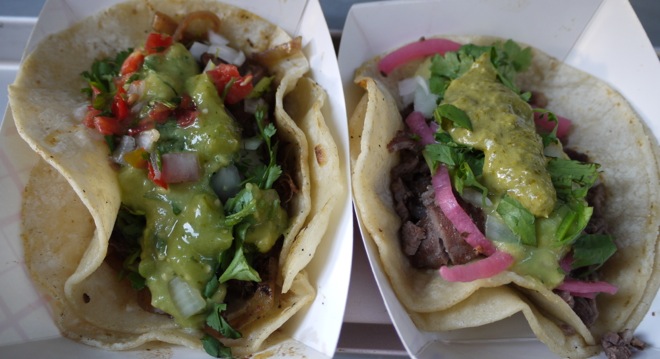 One of the most exciting restaurants to open in the “kosher corridor” (loosely defined as Pico Boulevard, between Beverly and La Cienega) this past year was Mexikosher, the first Mexican restaurant ever to cater to the dietary needs of the observant Jewish community in L.A. To say this restaurant is unique is to say Gaudí’s Sagrada Família is a nice building. Chef Katsuji Tanabe was born to a Japanese father and Mexican mother in Mexico City, and worked in top kitchens here in L.A. (Bastide, Mastro’s Steakhouse) before jumping into the world of kosher cooking at Shiloh’s Kosher Steakhouse, where he found the restrictive laws… strangely liberating.

After leaving Shiloh’s to open Mexikosher, Tanabe’s now parlayed his success to launch the Mexikosher truck, which debuted earlier this month. These are street tacos fit for a rabbi, and they are indeed produced under rabbinical supervision, with a “rabbi on board” at all times. (Is there a modified “baby on board” bumper sticker for that?)

Mexikosher’s tacos are excelente: slow-cooked beef and lamb birria dripping with cumin-spiced strands of tender beef topped with onions, cilantro, and one of Tanabe’s variety of superb salsas. I recommend getting the superb display of Mexican-Jewish fusion in his xarrisa (harissa spelled with that Spanish x) salsa on top of your birria de res taco, when available.

The Jewish business owners of the jewelry and fashion districts are the target audience, but an older Mexican stopped by and was happy to have a trio of carne asada tacos to go, unaware of the truck’s kosher status. But if you walk by his truck in a yarmulke, Tanabe immediately channels his inner Mexico-style street barker to let you know: ‘‘Hey, we’re kosher!”

But in watching a Jewish woman approach Tanabe to ask, “What was that thing wrapped in a leaf?” I witnessed Tanabe’s Mexican-accented English struggled to describe an item I just assumed everyone in the U.S. knew as the tamale. It was only then that I realized just how special Mexikosher really is to our community.

The Mexikosher truck can be found around town with updates through its Facebook and Twitter accounts every day except for Saturday, in observance of the Shabbat. Expect menu items to change as Tanabe is always tinkering with the menu.