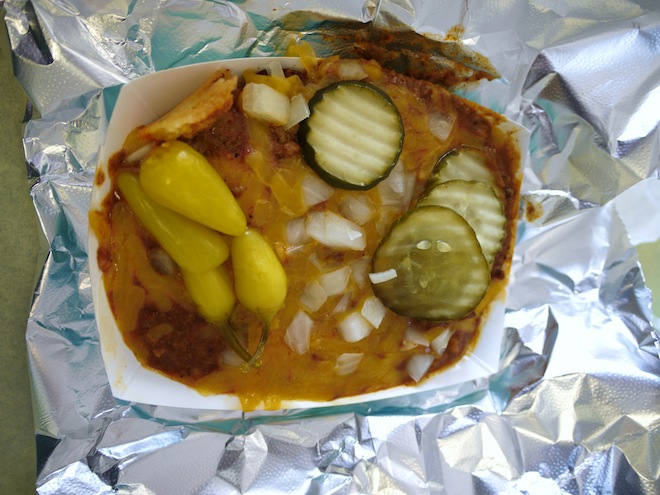 How many times have you found yourself and your enablers huddled around one of the two occupied tables at a 24-hour Tommy’s ‘round 4 a.m.—juiced—pupils dilated, rubbing blood-shot eyes? You really should go home, but there’s still one last act of self-loathing: a burger, greasy fries, or a dry tamale covered in a molten patchwork of yellow cheese.

I could never get myself to do it, but I watched with disgust and envy all at once. That is, until I found myself in Earle Grillz down on Crenshaw a few weeks ago. I had come for the dog, but found myself lured by their chilli cheese tamale set in a pool of savory, smoky chilli, dressed with chopped onion, pickles, and bitter pepperoncinis.

The decent tamale does its job of serving as a chilli delivery system, much like small broad bean tamales are used to mop up mole de romeritos (wild rosemary) in the Iztapalapa borough of Mexico City.

At Earle’s, the matriarch of the family walks around and checks on each customer with care, offering me a few shakes of Louisiana Hot Sauce to heat things up—“try this”, she says, simply, before moving on. A few bites in and you’ll know why Earlez Grille is one of L.A.’s enduring comfort food institutions. Let’s call it Vitamin EG.