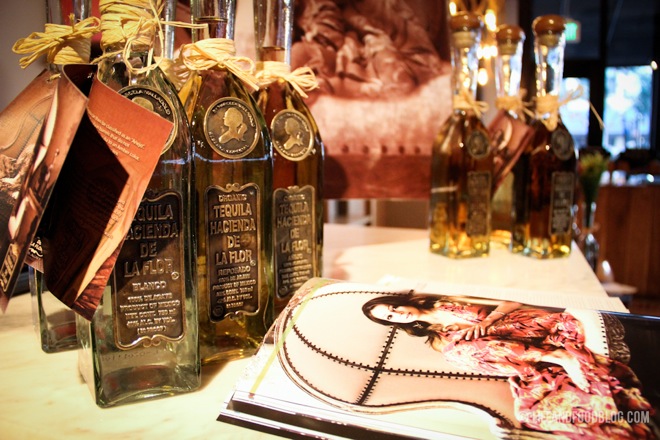 You say tequila isn’t a comfort food? While I respectfully disagree, I will admit that tequila not the most food-friendly spirit. It’s best enjoyed before a meal in my opinion, but it can stand up to a hearty companion like carnitas.  I’m pretty particular about my tequilas, and I’m always glad when I find one that actually excites me.

Last month I attended a media launch event for the newly reinvented Hacienda de la Flor tequila line. The brand has been around for a while, previously made at the La Cofradia distillery, a mega-operation that produces dozens of labels. (I once tasted 20+ tequilas in their Playa del Carmen tasting room and couldn’t find a single one worth buying.) Thankfully, Food Network chef Marcela Valladolid and her brother Antonio have taken over, moving production to Casa Tequilera de Arandas. The tequila terroir surrounding this distillery is tantamount to that of the best château in Bordeaux.

Hacienda de la Flor’s 100% organic tequila blanco is drawn from the crimson red soil of Arandas in the highlands of Jalisco, and tastes of pepper and light fruit. Since it doesn’t spend any time in barrels, the resulting tequila is a damn clean expression of the agave. A similar flavor indicative of Hacienda de la Flor holds steady throughout the whole line-up, present in the background in the smooth reposado (aged in barrels for a minimum of six months, but less than one year) all  the way up through the extra añejo (aged over five years), which picks up plenty of maple notes during its extended stay in wood. The use of neutral French oak avoids the nasty flavors—redolent of a sweaty t-shirt off of one of the Hells Angels’ backs after the Love Ride—that can often be found in tequilas aged in previously used Jack Daniels barrels.

The newly revamped Hacienda de la Flor tequila has just come into the U.S., and will be hitting the L.A. market soon. To make sure you’re getting the much-improved version, look for a silhouette of Marcela at the neck of the bottle and check its NOM, a governmental mark that tells you which distillery your tequila comes from. If you see any from 1137 out there on shelves, don’t bother; it’s leftover from the La Cofradia production. Wait for Valladolid’s version (NOM 1499) to come to your shelves.