Home Uncategorized Essential T: Carnitas Tacos from the Other Side of the Tracks 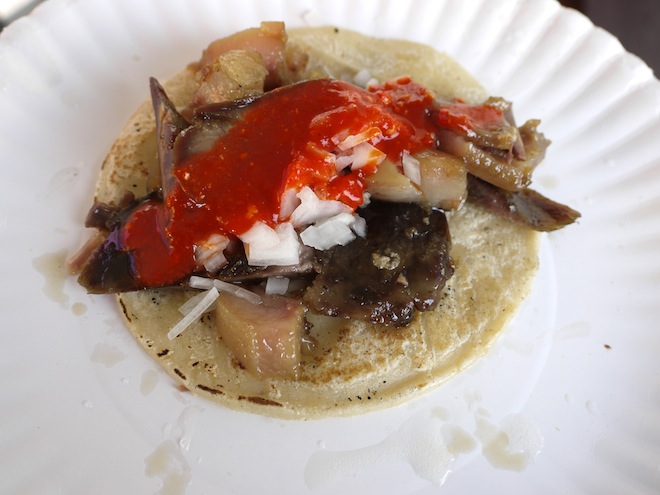 Carnitas are one of the most common selections at food trucks and at every kind of Mexican restaurant—from those serving traditional to to those serving pocho (Mexican-American) cuisine. But true carnitas are a style of cooking that is most highly regarded at street stands and taquerias in the Mexican state of Michoacan, Mexico City; Francisco de Los Romo, Aguascalientes; and the Bajio region.

While there are no artisanal carnitas in L.A., I’ve had a few decent plates from Michoacan-style vendors that have set up at the Mercado Olympic. There’s also a new Mexico City-style stand along Slauson’s “Pollo Loco” corridor, where many traditional grilled chicken stands are set up south of the abandoned railroad tracks. Though the chicken is what people come for, this place is a contender for the best carnitas crown. Currently holding that crown is Tacos Los Güichos.

Carnitas Estado de Mexico, or Mexico State carnitas—they don’t really have a name—is out on the weekends frying pork slowly in a stainless steel cazo, or large pot. They’re located just below the tracks, where the cook does a solid job of cooking head-to-tail pig so that it transforms into a rich meat with just the right texture, color, and melt-in-your-mouth pork flavor.

Like many other vendors, the parts of the pig that they haven’t mastered are actual muscle tissue—it’s the more difficult meat to cook in the cazo. Everything ends up with a nice flavor, but there’s so much more to the pig: hog’s maw, liver, snout, heart, skin, ears, uterus, tongue—get there early and name a part; they might just have it. When you’re done, there’s plenty of great food in the neighborhood: barbacoa, grilled chicken, taco stands, and there’s even a van selling tools—get some carnitas and pick up a hoe on Slauson—or a rake.