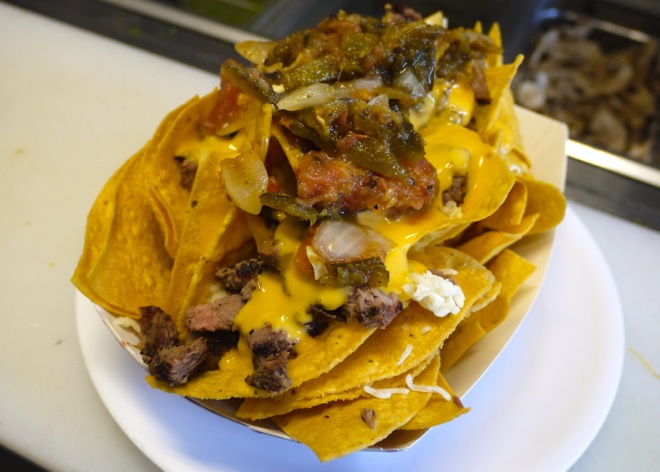 For diehard football fans and Super Bowl XLVII party crashers alike (you know, the ones that are just there to socialize and grub), this Sunday’s match between the Baltimore Ravens and the San Francisco 49ers in New Orleans means one thing: having the essential snacks is a must.

No Super Bowl shindig can be complete without beer, pizza, wings, barbeque, and flavors from Mexico: chips, salsa, guacamole, and nachos, a dish that evolved from northern Mexican totopos, a variation of tortillas chips served with various toppings.

Local nacho champions Esdras Ochoa and Javier Fregoso of Mexicali Taco & Co. won’t be open that day—they’ll be watching the game—but they agreed to share their famous recipe for carne asada nachos with you. With a little north-and-south-of-the-border spice on your side for the big game day, everybody wins.

Season one side of the steaks with sea salt and black pepper, squeeze on lime juice and let it marinate for one hour.

Meanwhile, clean and dry the Poblano peppers, then lightly coat the outside with vegetable oil using a paper towel. Roast the tomatoes whole under a broiler for about 6 minutes until they are charred. (Seal them in Tupperware after cooking to steam and loosen the skin for easy peeling.)

Pre-heat a charcoal (preferred), gas, or stove-top grill to medium heat. Cook the onions and Poblanos on the grill until they are charred and soft on the inside. Peel the Poblanos by rubbing them with a dry paper towel. Remove the top and stem, then remove the seeds. Cut the chiles into strips, and cut the onion into small squares. Peel the tomatoes, then roughly grind them in a molcajete, or mash them in a bowl with a fork. Combine all the salsa ingredients in a bowl, add the vinegar, then salt to taste.

Warm up the nacho cheese in a saucepan on the lowest heat setting.

Grill the steaks to your desired doneness (about 3 to 4 minutes for medium), turning only once. Let it rest, then chop the steak into one-inch strips.

Spread the tortilla chips on a serving tray, then sprinkle on the grated Monterey Jack cheese. Spread the grilled steak evenly atop the chips. Pour over the nacho cheese and top with the salsa de rajas.